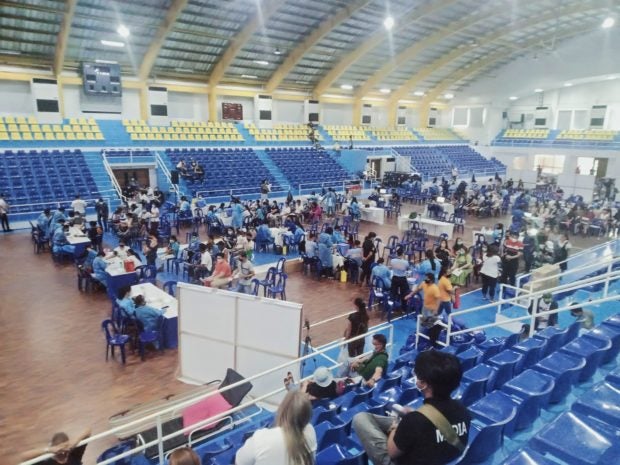 The ground hall of the Bulacan Capitol Gymnasium in the City of Malolos served as a venue for the first three-day national vaccination drive. (File photo by CARMELA REYES-ESTROPE / Inquirer Central Luzon)

MANILA, Philippines — Health Secretary Francisco Duque recommended on Monday the rescheduling of the second leg of the national vaccination drive in areas expected to be hit by a storm looming outside the Philippine area of responsibility (PAR).

The storm —  internationally known as Rai but will be locally called Odette on entering PAR — is expected to make landfall in Eastern Visayas on Thursday, Dec. 16, according to the Philippine Atmospheric, Geophysical and Astronomical Services Administration (Pagasa).

The next national vaccination drive is set to take place from Dec. 15 to 17. Duque said areas that would be hit by the storm would instead have the vaccination dates reset from Dec. 20 to 22.

The storm is forecast to hit Central and Eastern Visayas, Northern Mindanao,  and Southern Tagalog.

Because of that, Duque said the vaccination drive from Dec. 15 to 17 would only be conducted in Central and Northern Luzon.

According to Pagasa’s latest update, the storm may strengthen into a typhoon before making landfall on Thursday.