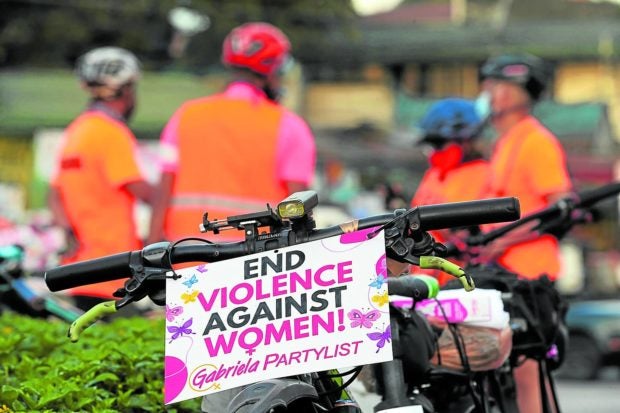 BIKERS’ CAUSE Bikers from various groups on Sunday assemble at Roces Park in Quezon City on the last day of their 18-day campaign calling for an end to violence against women. —NIÑO JESUS ORBETA

MANILA, Philippines — While biking on a beach in Real, Quezon province, in August, cyclists and content creators Levi Reyes and Sara de Guzman were harassed by a group of men.

“They catcalled us, laughed and screamed so we decided to confront them with our camera,” Reyes said on Saturday at the #DearSurvivor online discussion and sharing led by volunteer group Lunas Collective.

Aimed at raising awareness about gender-based sexual violence in public spaces, the activity was also in line with the 18-day Campaign to End Violence Against Women.

Upon realizing they were being filmed, their harassers were shocked and became silent. But what made her sad about the whole experience, Reyes said, was when the men’s wives, partners, and mothers came over and apologized to them, instead of the culprits themselves.

“We were sad about it because, for us, it seemed like they were allowing their spouses to be enablers of violence toward women,” Reyes and De Guzman said.

According to an official of the Philippine National Police, the reported incidents of gender-based sexual harassment (GBSH) went up by 91 percent this year, reaching 193 cases compared to 101 in 2020.

Of the 193 cases, 190 of the victims were women while the rest were male and not members of the LGBTQ community, Lt. Col. Joy Tomboc of the PNP Women Children Protection Center said during the Philippine Commission on Women’s virtual forum on sexual harassment in public and online spaces.

There are different forms of GBSH, including catcalling; unwanted remarks like wolf-whistling; sexist, homophobic, misogynistic, or transphobic slurs; persistent uninvited comments on a person’s appearance and groping.

Tomboc said that an act may qualify as GBSH in streets and public places if it took place in public transportation or app-based ride-hailing service vehicles.

It can also be considered GBSH if the offended party is a minor, senior citizen, a person with disability (PWD), a breastfeeding mother nursing her child, or if the perpetrator is a member of the uniformed services and the act was done while the perpetrator was in uniform.

Under Republic Act No. 11313 or the Safe Spaces Act, public spaces may also refer to streets and alleys, roads, sidewalks, restaurants and cafes, public parks, schools, and government offices.

Citing PNP data, Tomboc said that the most common places where GBSH incidents occurred were in residential areas, streets, and commercial business establishments.

Should gender-based harassment happen in malls, bars, or public establishments, the victim may report it to the designated antisexual harassment officer. If it takes place in the street, the incident can be reported to the local traffic enforcer.

But in all cases, the victims may also turn to the local government’s antisexual harassment hotline, the nearest police precinct through the women and children’s protection desks, local social welfare development officers, or the Public Attorney’s Office.

Barb Nava, a licensed physical therapist, and advocate of safe and accessible public spaces for women and PWDs, said that bystanders play a role in creating safe public spaces.

However, some of them do not take action for various reasons such as the bystander effect, or waiting for someone else to do something while harassment takes place, and the cultural notion that perpetuates the idea that “boys will be boys.”

Others also think that it is not their problem or nothing will happen if they offer help, Nava said, noting that some people do not know what to do.

For those who witness sexual harassment in public spaces, they can help the victim by doing the 5Ds: distract, delegate, delay, direct, or document.

Distraction can be done by starting a conversation with the victim or finding another way to draw attention away from her or him like asking for directions or the time, or by dropping something.

By delegating, the witness can seek help for the victim by calling the attention of a person of authority such as a security guard, bus driver, conductor, or store manager.

Delay, on the other hand, means checking on the victim after the incident and asking how she or he is doing and needs to be accompanied.

A sexual harassment witness, according to Bernz Soriano, a project coordinator for the Initiative for Media Freedom, should be direct, firm, and clear in talking to the victim and asking if she or he wants to leave the area.

Lastly, documenting the incident through a video or audio recording would be helpful, Soriano said. However, the person who recorded the incident should ask the victim first about what should be done with the footage. It should not be posted online without the victim’s permission or consent, she added.