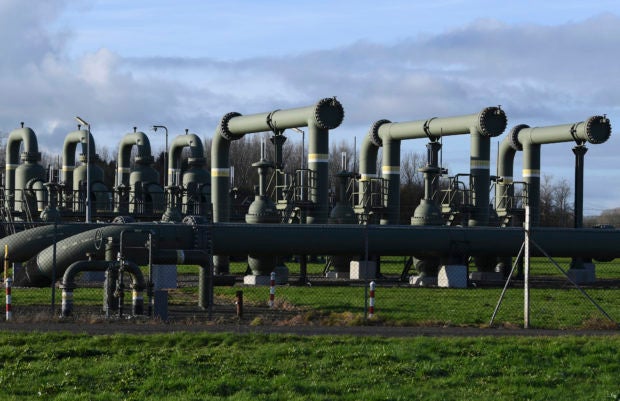 This picture, taken on November 23, 2021, shows pipes belonging to a gas extraction facility near Garelsweerd, in the Northern Dutch province of Groningen, where an earthquake measuring 3.2 on the Richter scale happened two weeks before. – Despite the Dutch government’s promise to halt all gas extractions by next year, earthquakes are expected to continue to plague the region for at least the next decade, experts say. (Photo by JOHN THYS / AFP)

GARRELSWEER, Netherlands — Teacher Daan Schoolland was asleep with his partner when the earthquake struck the northern Dutch hamlet of Garrelsweer in the middle of the night.

“It was like a wave, we could feel it coming towards us,” the burly father-of-three recalled. “When I woke up, the whole room was still shaking and my kids were crying in terror.”

The 3.2-magnitude earthquake in November was the largest for more than two years in this flat, agricultural region bordering Europe’s biggest natural gas field.

And it was the latest reminder that, although the Dutch are almost done with it, the Groningen field is not yet done with residents.

The area had been plagued since 1986 by increasingly strong earthquakes caused by air pockets collapsing after the gas has been pumped out.

Two years ago, Schoolland cheered with other locals as the government announced it would shut off the taps at the field by 2030.

Schoolland felt even more relieved when the timeframe was then shortened to the end of 2022. The Dutch government set up two commissions, one to deal with compensation and another to help residents fortify their homes against future quakes.

But his relief was short-lived.

“Even if we stopped right now extracting every molecule of gas, earthquakes will still continue to happen,” said Theodor Kockelkoren, the Dutch inspector-general of mines.

“Our estimation is that it will actually still take a couple of decades” for the soft earth below Groningen to finally settle, he told AFP.

That’s more bad news for residents like Schoolland, who is locked in a legal battle with one of the government’s commissions for compensation to fix damage to his home that he blames on the quakes.

“Look, here you can see how this studio apartment is pulling away from the rest of the house,” Schoolland told AFP, pointing to a crack in his home, originally built as a school in 1952 and later converted into a house.

“It’s really silly that a judge now needs to say, ‘pay these people for the damage the mining company has caused.’ It’s insane.”

Locals were “happy” with the announcement that extraction would end, “but in its place came something that became legally and technically far too complex”, said Coert Fossen, deputy chairman of the Groningen Bodem Beweging (GBB), the civic group fighting for residents’ compensation.

Compounding the issue, with Europe battling surging energy prices as it heads into the winter, the Dutch government has warned extraction may temporarily rise in 2022, just as the field was meant to close.

“However, I will only take this step if there is really no other option,” Economic Affairs Minister Stef Blok said.

For residents shaken by thousands of tremors, the government’s promises ring hollow.

Prime Minister Mark Rutte’s administration announced last month that some 27,000 homes need to be inspected, but so far only eight percent have been completed, according to the GBB.

“The Dutch government is struggling to ensure that the strengthening of houses and the repair to damages is done in a very expedient and efficient way,” said Kockelkoren.

An economic affairs and climate policy ministry spokesman told AFP “the results of earthquakes in Groningen are complex” and admitted that fortifying buildings “isn’t going well”.

But Jules van de Ven said the government had made 1.15 billion euros available for new ways of testing whether buildings are quake-proof, and 1.5 billion euros more for cultural, educational and social projects.

Residents also now benefited from a “reverse burden of proof” legal system, which presumes that damage is caused by quakes and it is up to experts to prove otherwise, he added.

The government had also taken over the process of claiming damages from the NAM mining company, so now “people don’t need to fight with the company. We do it for them.”

But for Schoolland, that’s small consolation.