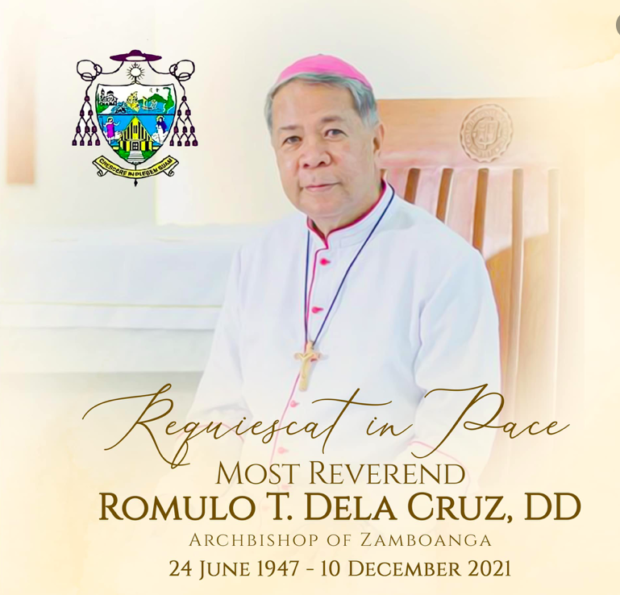 Most Reverend Romulo Tolentino dela Cruz. From the Facebook post of the Archdiocesan Youth Apostolate of Zamboanga

The statement said the prelate had long suffered from an illness, which was not disclosed.

Two days earlier, Dela Cruz observed the 49th anniversary of his ordination as a priest. He had served as leader of the Catholic flock in the city for over seven years.

Dela Cruz was born in Balasan, one of the poorest towns in Iloilo province, on June 24, 1947, and ordained priest on December 8, 1972 in Cotabato City.

Bishop Marvyn Maceda of San Jose de Antique said Dela Cruz was the third Bishop that served their province, from 2002 to 2008.

“We are saddened by (his) passing away. We extend our prayers and condolences to the Auxiliary Bishop and Apostolic Administrator of Zamboanga, Most Rev. Moises Cuevas, D.D., and the clergy, religious and lay faithful of the Archdiocese of Zamboanga, as well as to the Tolentino-Dela Cruz Family,” Maceda said in a statement.

“We mourn the passing of Archbishop Romulo dela Cruz who served as a father figure for the people of Basilan for almost a decade,” said House Deputy Speaker and Basilan Rep. Mujiv Hataman.