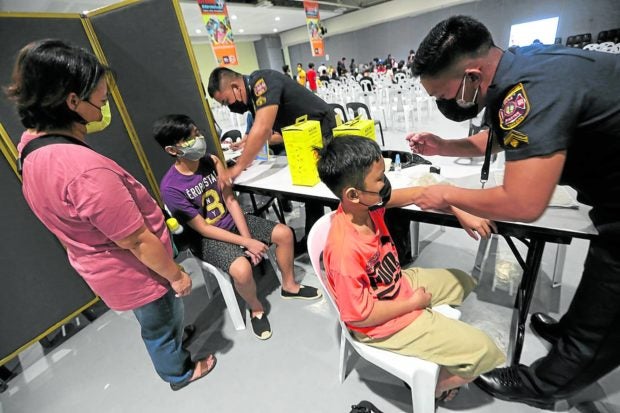 The Philippines aims to fully vaccinate at least 99 million individuals before President Duterte steps down from office in June 2022.

“The President’s marching order has been for us to inoculate no less than 90 percent of the Philippine population which is equivalent to about 99 million Filipinos before the end of [his] administration,” Health Secretary Francisco Duque III said on Thursday at the “Bayanihan Bakunahan” culmination activity.

Duque was optimistic that the government would reach its goal of fully inoculating 54 million Filipinos by year-end.

“I’m confident that we will be able to achieve this at the rate we are going and we have proven in the first three days of massive vaccination rollout,” he said.

“I hope this will pave the way for us to achieve the second milestone, which hopefully we will be able to accomplish in the early first quarter of next year and that is reaching 77 million Filipinos with completed jabs all over the country,” he added.

So far, 39.7 million Filipinos have been fully vaccinated against COVID-19 while 56.64 million have received at least one dose.

Around 6.5 million, or 22 percent, of adolescents between the age of 12 and 17 have also been inoculated while a total of 643,370 individuals have gotten booster shots.

National Task Force Against Covid-19 chief implementer Secretary Carlito Galvez Jr., who was also at the culmination ceremony, said that 10,254,560 doses were administered through the Bayanihan Bakunahan program between Nov. 29 and Dec. 3.

This was equivalent to a daily average jab rate of 2,050,912 doses, the highest recorded since the national vaccination program was rolled out in March.

The figure was higher than the scaled down target of 9 million, but still lower than the original goal of 15 million.

During the culmination program, the government cited the local governments of General Santos City, Tawi-Tawi province and Bangsamoro Autonomous Region in Muslim Mindanao for recording the highest improvement in their average vaccination rate.

On the other hand, the local governments that administered the highest number of jabs from Nov. 29 to Dec. 1 were Arayat, Pampanga; Tanza, Cavite; Rodriguez, Rizal; Cebu City; and Laguna province. Per region, Calabarzon (Cavite, Laguna, Batangas, Rizal and Quezon) was the top performer.

“President Duterte earlier made a promise that we will have a better Christmas this year. With the steady decline of Covid-19 cases in the country, where the positivity rate is below 3 percent, we are sure that we can fulfill this promise,” Galvez said.

The government will hold a second mass vaccination drive nationwide from Dec. 15 to Dec. 17. Duque reiterated his call for the public to participate in the program, saying that vaccines would help prevent “severe to critical COVID-19 infection, hospitalizations and deaths.”

“We cannot and we can never underestimate the virus because of its sheer potential for mutations. … Now we are under the threat of the Omicron variant. But it gives us some consolation that the very limited stream of information that comes our way seems to show that the Omicron variant [seems to result in mild cases],” he said.

“[I hope] Omicron will not lead to serious and severe critical COVID-19 cases because I think we can no longer afford another spike or surge. COVID-19 affected economies worldwide, especially the Philippines,” he added.