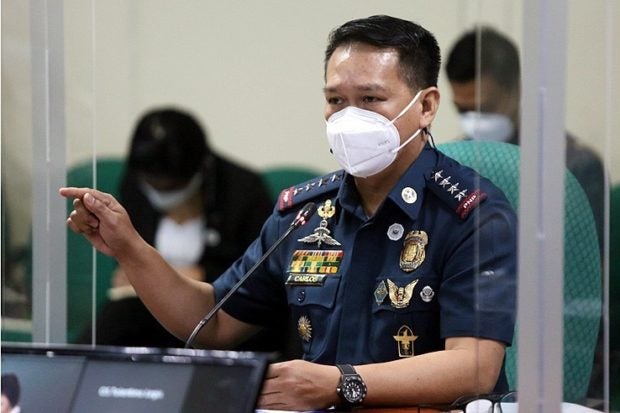 MANILA, Philippines — Police officers on the field and offices must remain alert against the threat of the COVID-19 pandemic even with the number of infections within the organization is going down, Philippine National Police (PNP) chief Gen. Dionardo Carlos stressed.

Carlos said this on Thursday, as active COVID-19 cases in the PNP went down further to 30, after only two new infections were recorded compared with eight new recovered patients.

Still, the PNP chief reminded officers that health experts still do not consider the country “out of the woods,” and that the threat of the new variant Omicron is still looming.

“Despite the significant improvement in the COVID-19 situation in the PNP, police personnel must remain aware and vigilant against the continuing risks posed by the virus and its variants,” Carlos said.

“This apparent improving trend should not be any cause for complacency among our personnel, because according to health experts, the Philippines is not yet out of the woods,” he added.

According to the information from PNP’s Health Service, the two new infections came from Cagayan Valley and Western Mindanao.  The good news is that all of the 30 active cases are considered mild to moderate cases.

None of the patients are admitted to hospitals, as they are recovering within isolation facilities.

As of Thursday, there are already 42,223 confirmed cases within PNP, of which 42,068 have recovered.  The death toll remains at 125 after no new patient died from the disease.

The low number of infections have been attributed by the PNP to a high vaccination rate, as 212,717 of all police personnel or 94.29 percent have been fully vaccinated already.  Only 11,199 officers or 4.96 percent are waiting for their second doses.

Vaccine hesitancy remains low, with only 898 or 0.40 percent of the entire police personnel not getting any vaccine dose.

Carlos said last Monday that they are looking to reassign their unvaccinated personnel to low-risk duties — or jobs with minimum exposure to the public, to avoid either infecting other people or getting infected themselves.