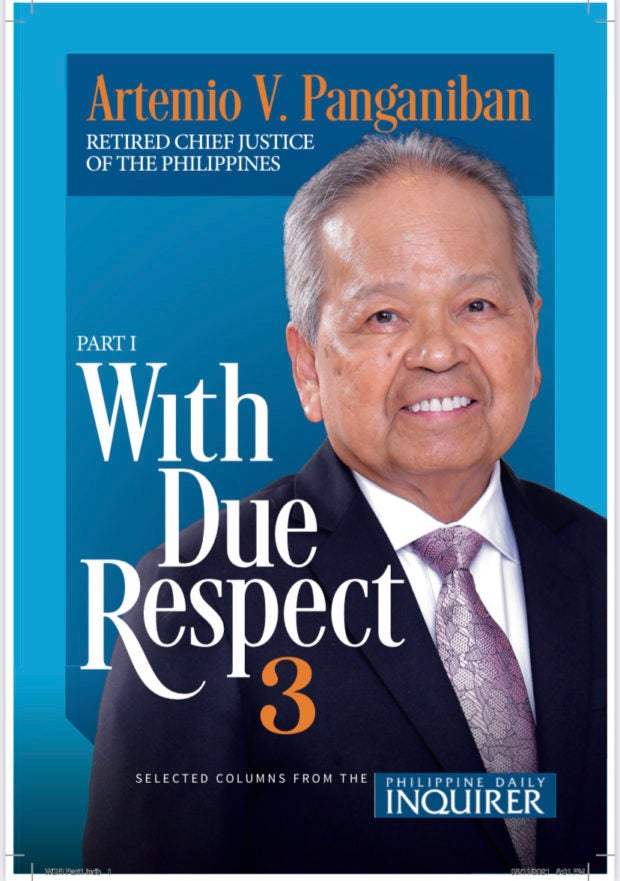 MANILA, Philippines — Chief Justice Alexander Gesmundo praised one of his predecessors, retired Chief Justice Artemio Panganiban, for his continuing contributions to the high court and to the country even as he celebrated his 85th birthday on Tuesday.

“For me, the one accomplishment of Chief Justice Art I envy the most is his incomparable ability to remain relevant,” said Gesmundo, who was the guest of honor during the launching on Dec. 7 of Panganiban’s third collection of select columns for the Inquirer, titled “With Due Respect 3.”

“Irrelevance, inconsequential, insignificance, these I have been told are the dreaded curse accompanying retirement,” the chief justice said.

But Panganiban, he said, has managed to take the opposite course even more than a decade after he retired from the highest court in the land.

Gesmundo described Panganiban’s opinion writing as a “most influential and potent tool for remaining relevant.”

Aside from the more than 1,000 decisions he penned for the Supreme Court, excluding resolutions, Panganiban has managed to continue achieving his goals for decades, even outside the high court.

“Through his column, Chief Justice Art undeniably continues to be a resonant voice, not just heard, but listened to by many from people with no legal backgrounds, to lawyers and law students, justices and judges and even those of us currently sitting in the highest court,” Gesmundo said.

“The power of his relevance will surely be a potent aid in the coming days, as the court champions three target outcomes: efficiency, innovation and access, founded and guided by the principle that the delivery of justice must be timely and fair, transparent and accountable and propelled by adaptive management,” the chief justice added.

Panganiban, who was present for the book launching on his birthday, thanked Gesmundo and the whole Inquirer Group of Companies, led by its president and chief executive officer Sandy Prieto-Romualdez.

“With Due Respect 3” comes in two volumes and collects some of the notable columns written by the former chief justice that were published in the Inquirer every Sunday over the past five years.

His first compendium of columns came out in 2011 while the second in 2016.

The launching was also attended by many of the movers and shakers of the business industry such as Manuel V. Pangilinan, Lance Gokongwei, spouses Tony and Grace Tan-Caktiong, Ramon del Rosario, Alfred Ty and Aurelio Montinola III, to name a few.

Panganiban said he never thought that he would one day be writing an opinion column for a newspaper.

“I sincerely thought I was not worthy to be counted among the Inquirer’s opinion writers, who are known to be the best in our country,” Panganiban said in a prerecorded speech played during the launching.

And yet, the former chief justice has done so for 15 years and many of his columns have even been collected into books, latest of which is “With Due Respect 3.”

And he did so, the retired magistrate said, because of his “historical romance” with newspapers, having had to peddle them along the streets of Sampaloc, Manila as a young boy.

Prieto-Romualdez also praised Panganiban for his tireless work and continuing relevance, as she calls to “take to heart the inspiration” instilled by the former chief justice of the high court.

“You never cease to amaze us,” she told Panganiban during the launching. “From being a newsboy to today, with all that you have accomplished and you’re not stopping just yet.”

The book is now available at Shopee and Lazada at P600 and comes with the two volumes of the “With Due Respect 3.”