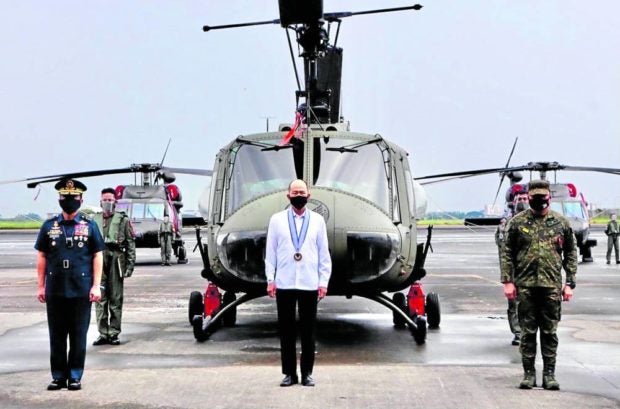 Defense Secretary Delfin Lorenzana on Tuesday night told reporters that the Department of Budget and Management has earmarked P32 billion to buy the new helicopters from Polish-aerospace manufacturer PZL Mielec and P30 billion for the OPVs from the Australian shipbuilder Austal, which has a shipyard in Balamban, Cebu.

Lorenzana said the government wanted the ships to be built in Cebu. Under Philippine law, the military’s equipment acquisitions projects should generate local employment “as far as applicable.”

However, no contract has yet been sealed for the patrol boats and helicopters as negotiations are still under way, according to Lorenzana.

“I hope we can sign the contract before the end of the President’s tenure, [since] the [procurement] process will take a bit long,” he said.

The Philippine military is largely focused on crushing the New People’s Army to end the more than half-century-old communist insurgency and defeating Islamic State-affiliated militants. At the same time, it is increasingly being challenged to beef up its external defense capability mainly due to Chinese incursions in the West Philippine Sea.

The OPVs will replace the World War II-era ships that the Navy earlier retired and will decommission, such as its Malvar class patrol corvettes.

Each OPV can accommodate 52 sailors and is equipped with a 76mm gun and two 25mm remote weapon systems. These ships are for coastal defense and patrol.

Based on the design unveiled by Austal during the Pacific 2019 international expo, they will each be 83.4 meters long, with a 13.3-m beam and a draft of 4 m. The ship has a flight deck that can handle a 10-ton helicopter and can launch and recover a drone.

Powered by diesel engines, it can sail at a maximum speed of 40.7 kilometers per hour and has a maximum cruising range of 6,482 km.

The planned purchases are part of the P35-billion budget for the revised modernization program of the Armed Forces of the Philippines next year. Under the law, the funds appropriated for the AFP modernization program are treated as a distinct and separate item from the regular budget of the Department of National Defense (DND).

During the change of command ceremony of the PAF on Tuesday, Lorenzana said President Duterte approved the plan to buy more Black Hawks to replace the PAF’s fleet of Bell UH-1 helicopters, the popular Vietnam War-era Hueys.

“The President said to just buy new helicopters so we can finally retire our Hueys, because a number of our crew had died while flying Hueys,” he said.

According to Lorenzana, more helicopters in the military fleet would ease the work of infantrymen who would no longer have to hike long distances.

“We no longer need to bring food provisions, because resupply will be easier. It all boils down to this synergy of our forces,” the defense chief added.

The 15 Black Hawks now in the PAF fleet have been used in various operations, including humanitarian assistance, disaster response missions, and recently to transport COVID-19 vaccines to remote areas in the country.

In November, the PAF received the last five to complete the country’s purchase in 2019 of 16 Black Hawks for $241 million from Sikorsky Aircraft Corp. through its subsidiary PZL Mielec.

The first six were delivered in November 2020, while the second batch of five was delivered in June. One of the first units crashed in an accident on June 24 while on a night-flying exercise, killing all six on board.

The acquisition of the OPVs for the Philippine Navy was part of the Horizon 2 of three “Horizons” in the AFP’s reformed modernization program.

Among the projects completed under Horizon 1, from 2013 to 2017, was the procurement of two Jose Rizal missile-equipped frigates.

Horizon 2, which was set for 2018-2022, includes the upgrade of the Navy’s MPACs (multipurpose attack crafts) and Del Pilar class frigates. The DND has not disclosed details of Horizon 3, slated for 2023 to 2028, but said it would include the continuation of projects that were not completed in the previous period.