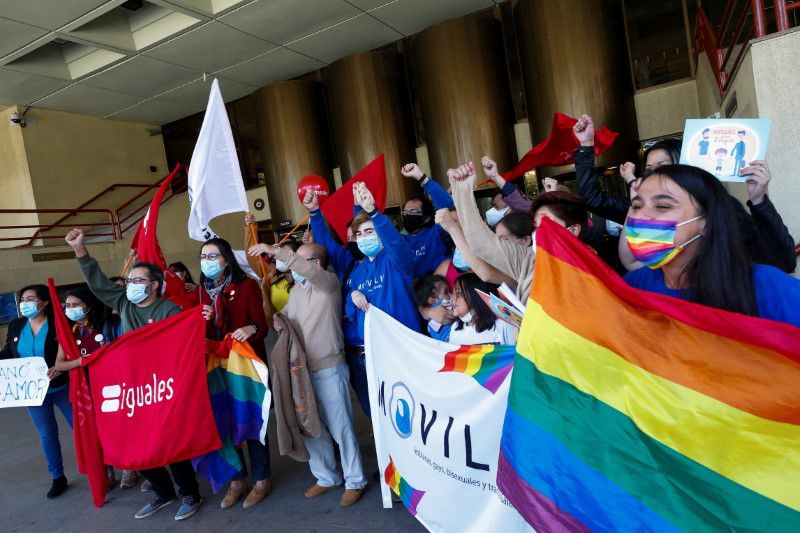 People react outside Congress as the Senate vote to approve a same-sex marriage bill in Valparaiso, Chile December 7, 2021. REUTERS/Rodrigo Garrido

PARIS — With Chilean lawmakers approving a same-sex marriage bill Tuesday, we look at the situation across the globe.

While the right to marry has been legalized in 30 countries, homosexuality remains banned in many parts of the world.

On October 1, 1989, for the first time in the world, several gay couples in Denmark tied the knot in civil unions, which while giving their relationships a legal standing fell short of full marriage.

It was the Netherlands that first allowed gay marriages, giving more rights in April 2001.

Other European countries allow only weaker civil partnerships for the LGBTQ community — including Croatia, Cyprus, the Czech Republic, Estonia, Greece, Hungary, Italy and Slovenia, which rejected gay marriages in a 2015 referendum.

The Czech government has backed draft legislation that would make the country the first post-communist member of the European Union to legalise same-sex marriage, but its fate is uncertain.

In Romania a referendum aimed at enshrining a ban on gay marriage in the constitution failed in 2018 because of a low turnout.

Progress in the Americas

Canada was the first American country to authorize same-sex marriage in 2005.

In 2015 the US Supreme Court legalized gay marriage nationwide at a time when it was banned in 14 out of 50 states.

However the United States’ first gay marriage actually took place in 1971, when a Minnesota couple obtained a marriage licence thanks to an overlooked legal loophole. The marriage was officially recognized in March 2019, after a five-decade legal battle.

Mexico’s federal capital authorised gay marriages in 2009. Half of its 32 states have followed.

Cuba left changes that would have paved the way for legal same-sex marriage out of its new constitution adopted in 2019. In 2021, a draft of a new family code opened the door to same-sex marriage, but it will be put to a referendum.

While much of Asia is tolerant of homosexuality, in May 2019 Taiwan became the first in the region to allow gay marriage.

In Japan, a court in northern Sapporo ruled in 2021 that the country’s failure to recognize same-sex marriage is unconstitutional, in a landmark first verdict on the issue.

Australia (2017) and New Zealand (2013) are the only places in the wider Asia-Pacific region to have passed gay marriage laws.

In the Middle East, where homosexuality is repressed, Israel leads the way in terms of gay rights, recognizing same-sex marriages that are sealed elsewhere although not allowing such unions in the country itself.

Several countries in the conservative region still have the death penalty for homosexuality, including Saudi Arabia and the United Arab Emirates.

Africa: marriage in one country

South Africa is the sole nation on the African continent to allow gay marriage, which it legalized in 2006.

Around 30 African countries ban homosexuality, with Mauritania, Somalia and Sudan having the death penalty for same-sex relations.