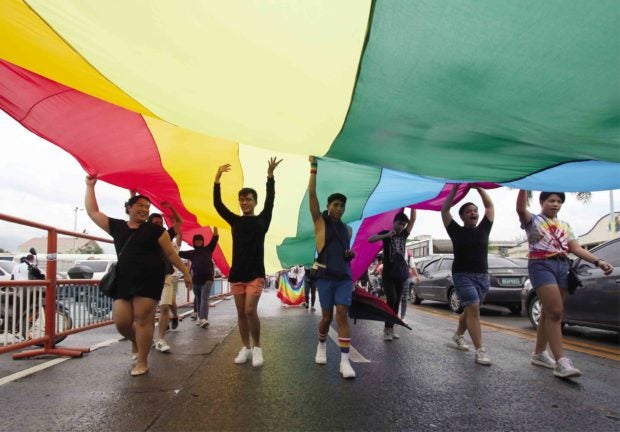 OUT AND IN JOY Members of the LGBT community show their true colors with gusto in Saturday’s Pride March at Marikina Sports Complex in Marikina City. —RICHARD A. REYES

The Philippines may be one of the most gay-friendly countries in the world, but the results of a recent survey indicated that three of five Filipinos oppose the civil union of same-sex couples.

A survey conducted by Social Weather Stations (SWS) from March 23 to March 27, showed that nationwide, 61 percent of the 1,200 respondents were against legalizing the civil union of two men or two women. Forty-four percent strongly disagreed with such a law, while 17 percent somewhat disagreed.

The SWS survey found the highest disagreement in the Visayas (66 percent), followed by the rest of Luzon (63 percent), Mindanao (58 percent), and Metro Manila (56 percent).

Quoting the survey results, Sen. JV Ejercito tamped down high hopes about a pending measure in Congress and said that same-sex marriage bill faced an uphill battle in the Senate.

“We in the Senate, being representatives, are very sensitive to the pulse of the people. Definitely, the pulse will play a factor in our decisions toward controversial and sensitive issues such as same-sex marriage,” Ejercito said on Saturday in a message to reporters.

Sen. Sonny Angara said lawmakers who belong to religious groups could be expected to oppose such a measure, which could provoke “a lot of vigorous debate.”

He would rather push for the recognition of a civil union between people of the same sex, said Sen. Francis Pangilinan in a radio interview, adding that such a union would set the rules on how properties would be divided between couples.

A pending bill in the House of Representative seeks to recognize the unions of lesbian, gay, bisexual and transgender (LGBT) couples and grant them the same rights and privileges that heterosexual spouses enjoy.

The noncommissioned SWS survey,  which used face-to-face interviews, had an equal number of male and female respondents.

Its results showed that by religion, net agreement over a law legalizing same-sex unions was lowest among members of Iglesia ni Cristo at -64, followed by members of other Christian religions. Agreement was also “very weak” among Muslims at -48 percent, and the Roman Catholics, at -36 percent.

Opposition to a civil union between LGBTs was strongest among single men who are widowed, separated or divorced (7 percent agree, 77 percent disagree). 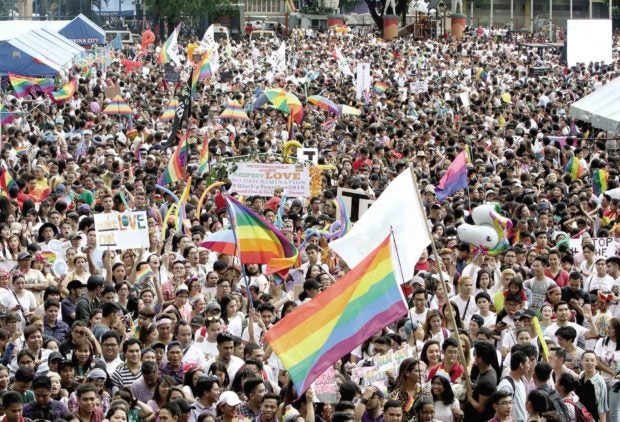 RISING TOGETHER Members of the LGBT community gather for Saturday’s Pride March in a show of solidarity at Marikina City Sports Complex. —RICHARD A. REYES

In a 2013 survey by the US-based Pew Research Center, the Philippines ranked 10th among the 17 countries in the world with a high level of public acceptance of homosexuals.

Thirty-nine countries were covered by the survey titled “The Global Divide on Homosexuality” conducted by Pew Research from March 10, 2013 to April 3, 2013.

Despite their religiosity, 73 percent of adult Filipinos agreed with the statement that “homosexuality should be accepted by society,” in face-to-face interviews conducted in Tagalog, Cebuano, Ilonggo, Ilocano and Bicolano.

The survey covered 804 Filipinos aged 18 and above.

“Brazilians and Filipinos are considerably more tolerant of homosexuality than their countries’ relatively high levels of religiosity would suggest,” the Pew survey report said.

The survey also indicated that age was a factor in the acceptance of homosexuality, with younger respondents offering far more tolerant views than older ones.

Women too were consistently more accepting of gays than men, the survey report said.

The report showed that of the eight countries surveyed in the Asia-Pacific region, the Philippines had the second highest acceptance rate next to Australia’s 79 percent.

In contrast, only 3 percent of people in neighboring Indonesia, 9 percent in Malaysia, and 21 percent in China said homosexuality should be accepted, the report added.