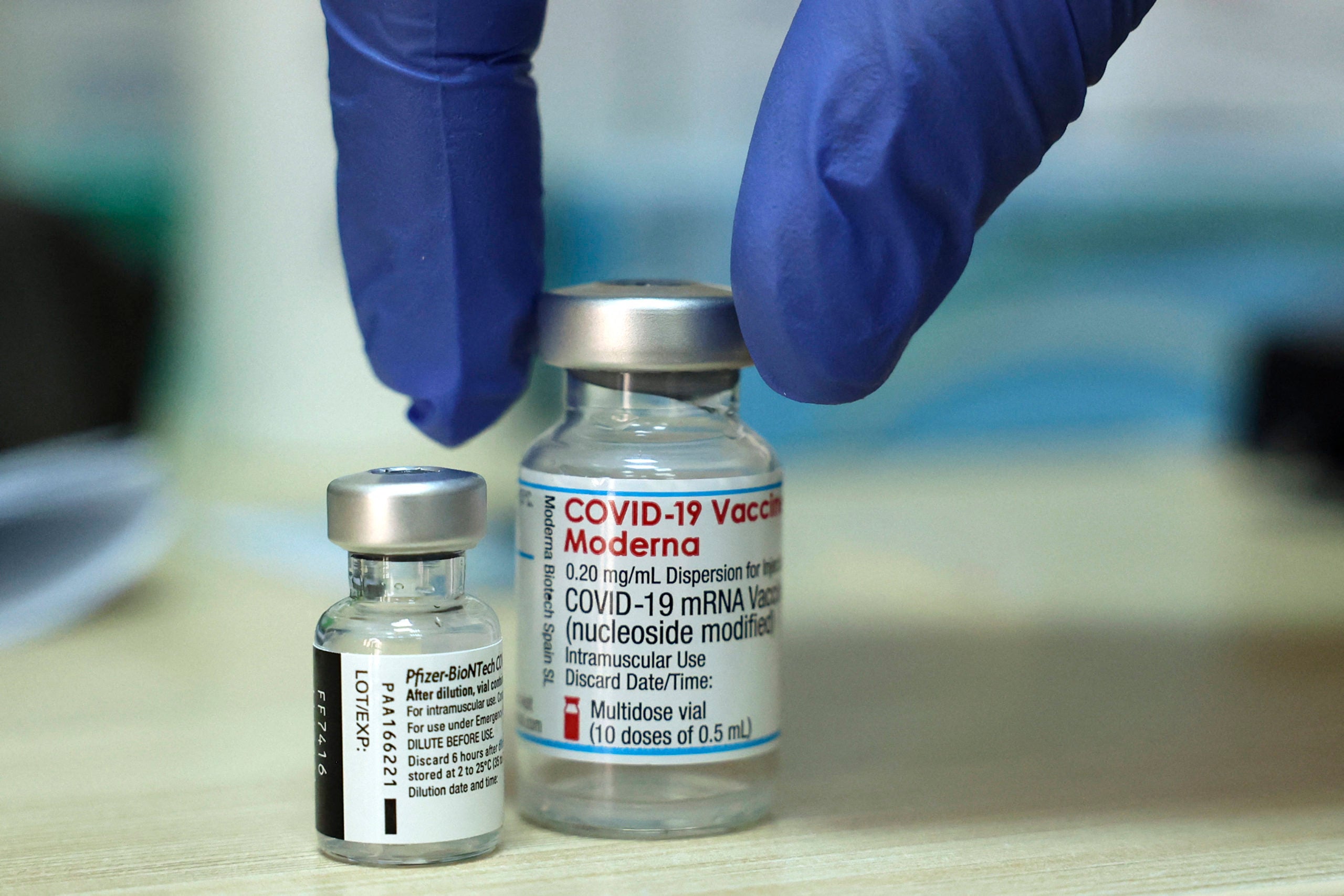 (FILES) In this file photo taken on August 10, 2021 a medic places two vials of COVID-19 coronavirus vaccines (L to R): Pfizer-BioNTech and Moderna, on a table before administering doses at a Clalit Health Services Medical Centre in east Jerusalem. – The US Food and Drug Administration (FDA) on Wednesday authorized using a so-called “mix and match” strategy for eligible people who require a booster shot of a Covid vaccine after their primary series. “The FDA has determined that the known and potential benefits of the use of a single heterologous booster dose outweigh the known and potential risks of their use in eligible populations,” the agency said in a statement. (Photo by HAZEM BADER / AFP)

GENEVA — Omicron does not appear to cause more severe disease than previous Covid variants, and is “highly unlikely” to fully dodge vaccine protections, a top WHO official told AFP Tuesday.

Speaking to AFP, the World Health Organization’s second-in-command, said that while a lot remained to be learned about the new, heavily mutated variant of Covid-19, preliminary data indicated it did not make people sicker than Delta and other strains.

“The preliminary data doesn’t indicate that this is more severe. In fact, if anything, the direction is towards less severity,” WHO emergencies director Michael Ryan said in an interview, insisting though that more research was needed.

“It’s very early days, we have to be very careful how we interpret that signal.”

At the same time, he said there was no sign that Omicron could fully sidestep protections provided by existing Covid vaccines.

“We have highly effective vaccines that have proved effective against all the variants so far, in terms of severe disease and hospitalization,” the 56-year-old epidemiologist and former trauma surgeon said.

“There’s no reason to expect that it wouldn’t be so” for Omicron, he said, pointing to early data from South Africa where the variant was first detected that “suggest the vaccine at least is holding up in protection terms”.

Ryan acknowledged it was possible that the existing vaccines might prove less effective against Omicron, which counts more than 30 mutations on the spike protein that dots the surface of the coronavirus and allows it to invade cells.

But he said it was “highly unlikely” it would be able to evade vaccine protections altogether.

“We have to confirm if there’s any lapse in that protection, but I would expect to see some protection there.

“The preliminary data from South Africa wouldn’t indicate that we will have a catastrophic loss of efficacy. In fact, the opposite at the moment.”

In the fight against all Covid variants, he said, “the best weapon we have right now is to get vaccinated.”

Two weeks after first being identified, Omicron has been found in dozens of countries around the world.

Early data from South Africa indicates that the new variant is likely more transmissible than previous variants, Ryan said, adding that this was not a surprise.

“When any new variant emerges, it will tend to be more transmissible, because it’s got to compete with previous variants,” he said.

The fast-talking Irishman said one could expect Omicron to gradually replace Delta as the dominant strain.

But he pointed out that Omicron had so far been seen spreading especially quickly in South Africa, where Delta had waned, and may just be “exploiting a gap in the transmission of Delta”.

There are also indications that Omicron is better at infecting people who have been vaccinated or already had Covid.

“There is some evidence to suggest that reinfection with Omicron is more common than it was with previous waves or previous variants,” Ryan said.

But “we’re particularly interested in seeing not whether you can be reinfected with Omicron, but whether any new infection is more or less severe.”

He said that, as the current Covid vaccines aim to prevent severe disease but do not necessarily protect against simply contracting the virus, reinfections with mild or no symptoms were of lesser concern.

In any case, Ryan said, despite its mutations, the new variant was still Covid, and should be fought with the same measures, including vaccines, masks and physical distancing.

“The rules of the game are still the same.”

Is the world overreacting to the Omicron variant?