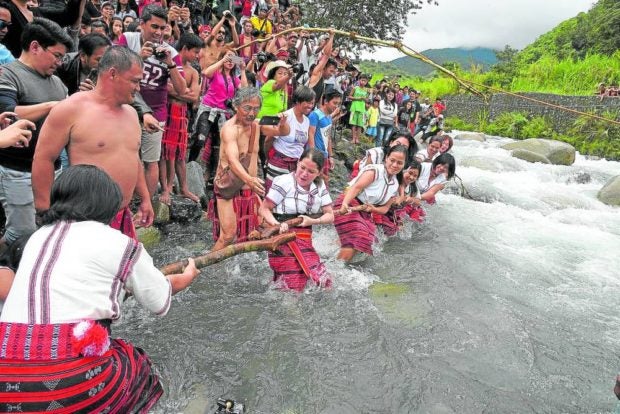 RICE CYCLE RITUAL Rice is at the center of culture and rituals in Ifugao province, home of the centuries-old rice terraces. In Hungduan town, thanksgiving rituals are held after a bountiful harvest and in 2018, Tourism Secretary Bernadette Romulo Puyat joined community members in the tugging ritual called “punnuk.” —PHOTO BY EV ESPIRITU

The Philippines will be the first country to roll out “golden rice” for commercial cultivation in 2022, according to the Department of Agriculture (DA). Also called “yellow rice,” golden rice has a high concentration of beta-carotene (vitamin A), which will help ease local malnutrition.

But the risk of seed contamination is high and the DA must consult farmers who cultivate traditional grains like “tinawon,” which is grown on the rice terraces of Ifugao and Mountain Province, and Kalinga’s “unoy,” said Baguilat, who served as governor from 2007 to 2010, and as Ifugao congressman from 2010 to 2019.

Indigenous rice farmers must provide their free, prior and informed consent (FPIC) should golden rice seeds be introduced in neighboring areas, he told the Inquirer during a visit here on Monday.

“Of course, ricefields growing golden rice must be far away from the rice terraces,” said Baguilat, who is in the senatorial slate of presidential aspirant and Vice President Leni Robredo.

“Proper studies about buffer zones should be conducted because Ifugao had already suffered the impact of invasive species due to well-meaning government projects,” he said, citing the impact of the “golden kuhol” (snail) in the early 1980s.

Introduced as a protein supplement for Ifugao residents, the snails were not supposed to be bred at the ricefields, “but who knew that once the snails laid eggs, they would become pests” that fed on newly planted rice plants, Baguilat said.

The DA and the International Rice Research Institute were licensed to develop the gene-modified grain, and were cleared to launch yellow rice farms by biological safety regulators in July next year, said Judge Joy Angelica Santos Doctor of the Municipal Trial Court in Cities in Tagbilaran City during a safe food forum conducted online on Dec. 1.

Doctor, a native of Benguet province, served as policy officer for Southeast Asia Regional Initiatives for Community Empowerment in 2009 and has been promoting agricultural biodiversity and farmers rights. She also represented the country in the 2015 convention of parties for the Convention on Biological Diversity, a multinational agreement regarding the use and movement of “living modified organisms” around the globe.

Doctor said the government must first conduct an in-depth analysis of the socioeconomic impact of yellow rice on heirloom rice farmers. The biological safety guidelines covering the use of genetically modified organisms (GMO) in the country does not require risk assessments on small industries and local cultures, she said.

So far, no details have been released as to where the pilot farms would be located.

According to Doctor, the DA should also collaborate with its counterparts in the Association of Southeast Asian Nations because of the potential impact of golden rice on the region’s rice-exporting neighbors.

Doctor said the biosafety regulations of the European Union recognized that “GMOs may reproduce in the environment and cross-national frontiers and the effects of such releases on the environment may be irreversible.”

More than 600 heirloom rice varieties have been documented, many of them in the Cordillera, which are undergoing DNA analysis and are targeted for seed conservation and protection from biopiracy, said Cameron Odsey, the DA regional director.

The heirloom rice program intends to reintroduce indigenous grains that are fast disappearing because these varieties have not been propagated for generations, he said.

Odsey said constitutional and other legal safeguards exist to block the entry of foreign commodities in heirloom rice centers, such as the FPIC prerequisite before any commercial undertaking can even take place.

Heirloom rice farms are also high up the mountains while future golden rice plantations are in the flatlands of lowland provinces, Odsey said, so there is a much greater risk that heirloom seeds would be stolen compared to GMO contamination which is “remote.”