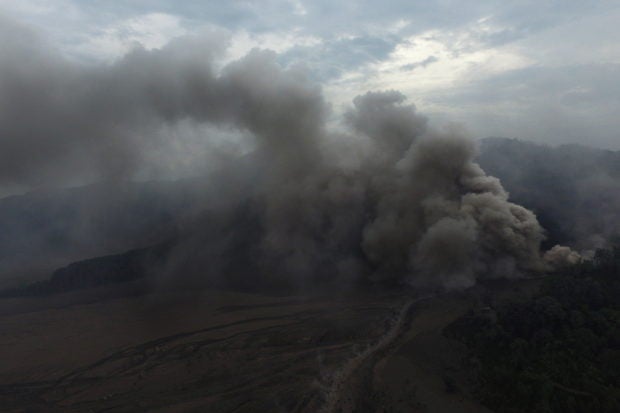 SUMBERWULUH, Indonesia — Heavy rain and wind temporarily halted rescue efforts on Monday after Indonesia’s Semeru volcano erupted and killed 14 people on the weekend, and officials urged residents to be vigilant because the danger had not passed.

The tallest mountain on the island of Java erupted dramatically on Saturday, shooting a towering column of ash into the sky that blanketed surrounding villages. More than 50 people had suffered injuries from the eruption, mostly burns.

Aerial footage showed roofs jutting out of an ashen landscape, while on the ground, military officers, police and residents dug through mud with their hands to extricate victims.

On Monday, Liswanto, the head of the Semeru Volcano Observatory, warned people to keep a safe distance from the mountain, amid reports anxious residents had returned to their homes to check on belongings and livestock.

“The status of Mt. Semeru is still at level 2, which means at this level, people need to be more vigilant because the potential threat is still there,” he said.

Lava flows had destroyed a strategic bridge connecting two areas in the nearby district of Lumajang with the city of Malang.

In the Sumberwuluh area, where two trucks lay half-buried by volcanic ash, recovery efforts came to an abrupt halt because of strong winds, a Reuters witness said.

Dewa Arya, from the search and rescue agency, said Monday his team was working to retrieve a family of five victims, but their efforts had been temporarily thwarted by bad weather.

People posted photos of their missing relatives on Facebook, with public pleas for any information about their whereabouts.

Public kitchens and health facilities have been set up for more than 1,000 people who have been displaced.

A trauma healing team to work with children affected by the eruption has been dispatched, CNN Indonesia reported, while hundreds of aid packages, including rice, blankets and clothes and other basic necessities have been sent to the area.

Semeru is one of more than 100 active volcanoes in Indonesia, a country that straddles the Pacific Ring of Fire, an area of high seismic activity that rests atop multiple tectonic plates.