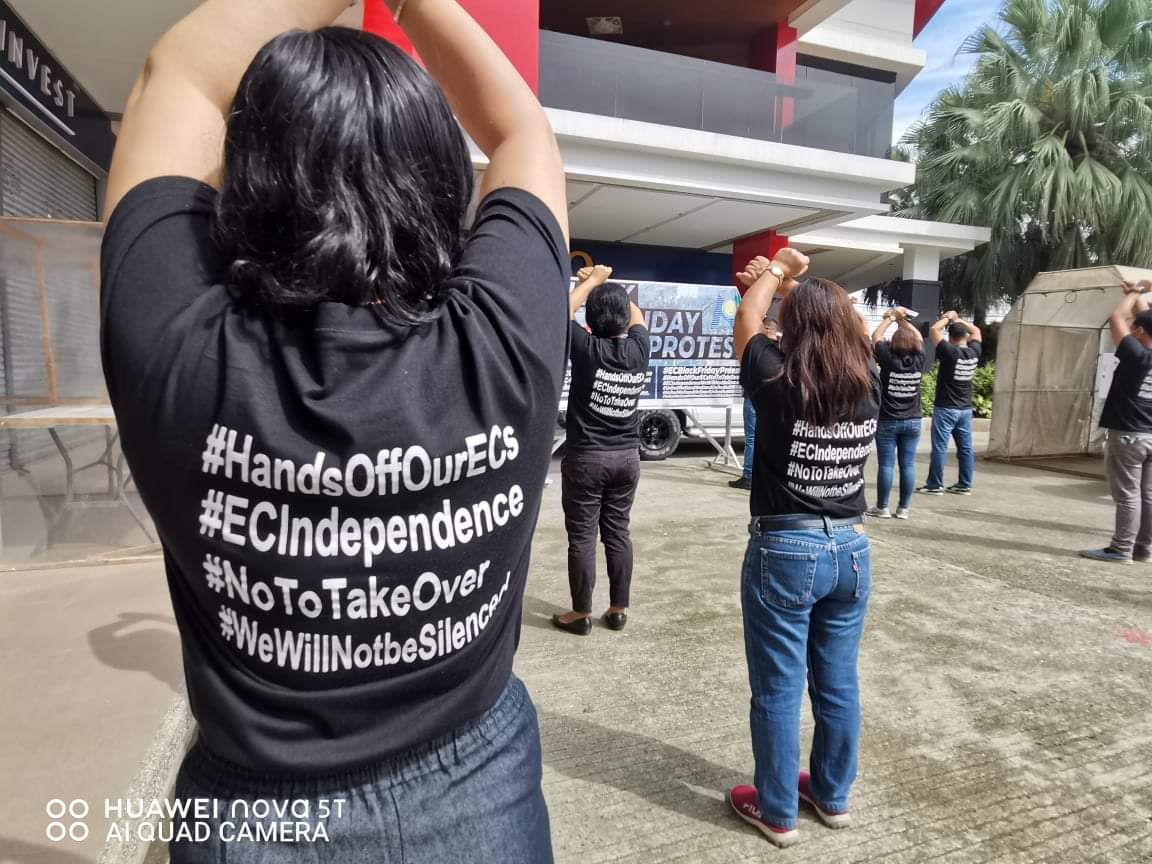 Wearing black shirts opposing what they called “franchise-grabbing” by the Davao Light and Power Company, workers of the Northern Davao Electric Cooperative, Inc. join the Black Friday protest outside their office building in Tagum City. CONTRIBUTED PHOTO (from Nordeco)

TAGUM CITY—Protests have snowballed against the granting of the congressional franchise to the Aboitiz-owned Davao Light and Power Company (DLPC), which is expanding its operation to six towns and two cities in Davao del Norte and Davao de Oro provinces.

Mario Angelo Sotto, general manager of the Northern Davao Electric Cooperative Inc. (Nordeco), and Engr. Emmanuel Galarse, Nordeco supervisor who helped unify the electric cooperative’s feuding factions two years ago, said in a position paper that granting the franchise to DLPC through House Bill No. 09978 would double the electric rates of households in its distribution charges.

A manifesto, signed by 94,000 Nordeco members, said the privatization of the areas covered by the DLPC franchise application would adversely affect the national government’s Sitio Electrification Program (SEP) and deprive more than 600 still-to-be-energized sitios under Nordeco operation.

The Davao del Norte chapter of the National Center of Electric Cooperative Consumers, Inc. also supported Nordeco’s move, saying the SEP would no longer be given subsidies by the national government once it is operated by a “private-capitalist distribution utility firm like DLPC.”

In a separate statement, the Philippine Rural Electric Cooperatives Association, Inc. denounced the “railroading of DLPC franchise expansion” after the House committee on legislative franchise approved on Dec. 1 without considering an in-depth deliberation of the then HB 09978, which was renamed HB 10554.

“The bill has been railroaded. During the (legislative) committee’s first and only deliberation, the Department of Energy, NEA, and the Energy Regulatory Commission had yet to submit their position papers; and yet, the measure was approved together with a committee report,” the Philreca statement said.

In a letter to the House Majority Leader, party-list representatives belonging to the “power bloc” questioned the “unusual haste” in the scheduling of House Bill 10554, considering that the initial deliberation was held only on Nov. 29, a mere two days before its approval on second reading on Dec. 1 in the plenary.

HB10544 aims to expand the franchise area of DLPC to “construct, operate and maintain an electric light, heat, and power system” in areas already serviced by Nodeco, namely: Davao City and the Davao del Norte towns of Carmen, Panabo, Dujali, and Santo Tomas for 25 years.

During the committee hearing, congressmen belonging to the “power bloc” opposed the measure, citing its repercussions.

“It would constitute an unwarranted monopoly of distribution services, not just in the (country’s) largest city, but also in the two provinces of this huge (Davao) region,” said Philreca Rep. Presley De Jesus.

Dagooc said it would be more sustainable to strengthen the services of Nordeco by refining its policies and power contract agreements instead of simply allowing a private distribution utility to take over.

“(Granting DLPC the franchise) will (violate) the constitutionally guaranteed right to equal protection of laws to the emaciated franchise area of Nordeco,” said Rural Electric Cooperatives Board of Directors Association Rep. Godofredo Guya.

The power bloc urged the House committee on rules to invoke Section 59 of the House Rules and requested that the measure be re-committed to the committee on legislative franchises for further discussion.