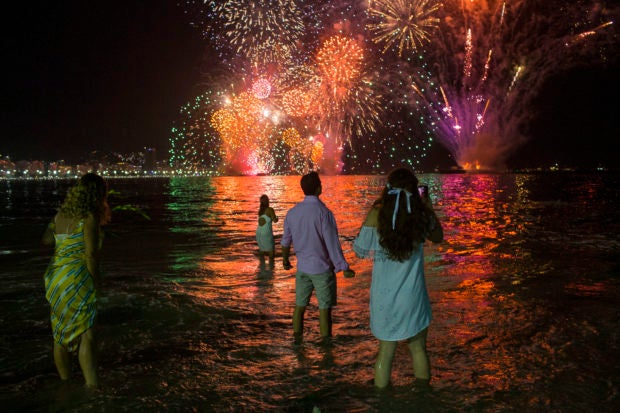 In this file photo taken on December 31, 2019 people celebrate as they watch the traditional New Year’s fireworks at Copacabana Beach in Rio de Janeiro, Brazil. AFP

RIO DE JANEIRO — Rio de Janeiro has decided “with sadness” to cancel its huge New Year’s celebration amid rising concerns over the spread of the new Covid-19 variant known as Omicron.
The move also raises doubts about the city’s iconic Carnival in February.
“We are going to cancel the official celebration of the New Year’s party in Rio,” Mayor Eduardo Paes announced Saturday on Twitter.
He added the decision was made “with sadness,” but in view of the rapid spread of Omicron. Six cases of the variant have been confirmed in Brazil to date.
The decision followed intensive debate between city officials and Brazilian health experts, with Omicron arriving after months in which the virus situation in the country had been substantially improving.
But in the end, Paes said, “Let us respect science” and take a cautious approach.
More than 20 other Brazilian cities, including populous Sao Paulo, have already canceled year-end festivities.
On Thursday, Paes said people would now need Covid-19 vaccination certificates to enter beauty salons, restaurants, bars and hotels. They were previously required in cinemas, theaters, gyms, museums and sports stadiums.
The city’s New Year’s festivities, involving joyous dance music and extravagant fireworks displays, typically bring some three million people to famed Copacabana beach.
But even without the fireworks, Paes later told reporters, “the city remains magical, incredible, welcoming,” and “vaccinated tourists will be very welcome.”
He also sought to project optimism about the Carnival, noting that it is still three months away.
In the meantime, Rio’s famous samba schools are continuing the work of preparing — practicing dance moves, preparing floats and creating exotic costumes.
Covid-19 has claimed more than 615,000 lives in Brazil — trailing only the United States.
ADVERTISEMENT
FEATURED STORIES
NEWSINFO
Start oil drilling in West PH Sea to address fuel price hikes — Robin Padilla
NEWSINFO
Sara Duterte won’t see Robredo before June 30; plans to have lunch with ex-VPs
NEWSINFO
K to 12 curriculum ‘too overcrowded’: Gatchalian seeks focus on Math, Reading