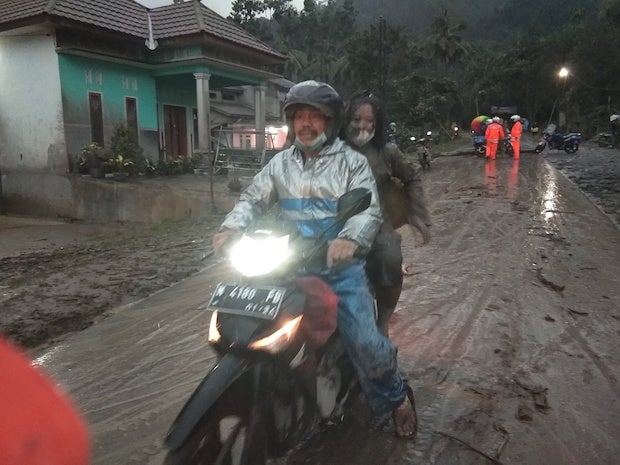 People ride a motorbike on a road that is covered with volcanic ash following an eruption of the Semeru Volcano at Sumberwuluh village in Lumajang regency, East Java province, Indonesia, Dec. 4, 2021, in this photo taken by Antara Foto. (Antara Foto/Hermawan/via REUTERS)

JAKARTA —  Mount Semeru on the Indonesian island of Java erupted on Saturday, killing one person, injuring at least 35 and trapping some people in buildings as it spewed out huge clouds of smoke and ash, officials said.

The deputy chief of Lumajang district, Indah Masdar, told a news conference one person had died and 41 people had suffered burn injuries.

The disaster mitigation agency (BNPB) said later that 35 patients were being treated at local medical facilities.

Indah asked for helicopters to rescue people trapped inside buildings.

“We’re in big distress,” she said, adding there were at least 10 people trapped.

“It’s harrowing, their families are all crying.”

Thoriqul Haq, district head of Lumajang, said a number of sand miners were trapped near mines, but did not give further details.

Haq told Reuters that the road and bridge connecting Lumajang and the nearby city of Malang were severed.

“This has been a very pressing, rapid condition since it erupted,” he said. Haq added that evacuations were underway, but did not give details.

He later told news channel MetroTV that the severed bridge meant one nearby district had no access to medical help.

AirNav Indonesia, which controls Indonesian airspace, said in a statement the eruption did not “cause significant impact” on flights.

Semeru, the highest on Java island, is among Indonesia’s nearly 130 active volcanoes. It erupted in January, causing no casualties.