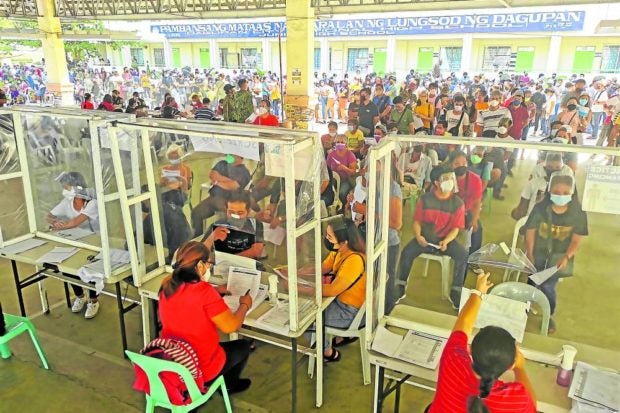 The government was able to administer 8 million doses of the vaccine against COVID-19 during the three-day national vaccination days, falling short of its target of 9 million.

Nevertheless, Malacañang hailed the outcome of the event.

It recorded the fourth highest in the world in terms of single-day jabs administered at 2.8 million, Nograles said.

He also said the Philippines was No. 1 in terms of seven-day moving average jabs per 100 people per day, across countries with a population of 100 million or greater.

The 8.01 million doses administered in three days was 89.06 percent of the government’s committed target, he said.

With the vaccination centers open for 12 hours per day, this means that over the course of 36 hours, some 222,500 Filipinos were vaccinated per hour or 3,708 per minute or 62 per second, he said.

Prior to this, the Philippines administered an average of 900,000 doses per day, he said.

He said the government had high hopes for its next national vaccination days.

“We believe that we will do better in the second round of the national vaccination days this December, God willing and with the help of the people,” he said at a press briefing.

The first round of national vaccination days was extended in some areas of the country on a voluntary basis, in response to the flood of people who wanted to get the jab.

The Philippines is aiming to fully vaccinate 54 million Filipinos by the end of the year.

Health Undersecretary Myrna Cabotaje said Filipinos who completed their vaccination abroad could still get booster shots in the Philippines.

But Cabotaje said they must have been fully vaccinated for six months.

The country has enough vaccine supply, she said.

It has received a total of 146 million doses and deployed 115 million, she noted.

She said the latest doses it deployed were enough for 15 million, which was the original target of the three-day national vaccination campaign.