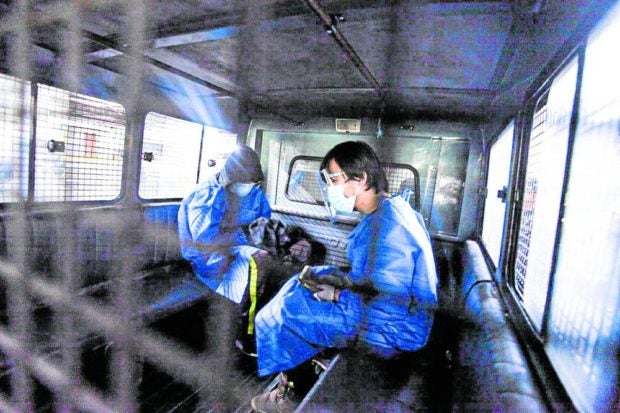 PASAY DETAINEES Transported from the Pasay City Jail where they have been detained since Monday, Pharmally Pharmaceutical Corp. executives Mohit Dargani (right) and Linconn Ong arrive at the Senate for another grilling on Friday. —SENATE PUBLIC RELATIONS AND INFORMATION BUREAU

The Bureau of Internal Revenue (BIR) has turned over to the Senate 23 tax records which may be of help to the blue ribbon committee, as lawmakers raised suspicions of tax evasion among companies that allegedly benefited from the government’s multibillion peso procurement of medical supplies for the pandemic response.

The BIR early in September started auditing Pharmally Pharmaceutical Corp. in particular about a month after the Senate inquiry led by Sen. Richard Gordon began.

In a statement on Friday, the bureau said documents subpoenaed by the committee were delivered on Wednesday to the office of Senate President Vicente Sotto III.

Since tax records were confidential, these cannot be made public and could only be discussed in an executive session, Internal Revenue Commissioner Caesar Dulay earlier told senators.

The BIR is also checking the tax compliance of 76 taxpayers mentioned in a Commission on Audit (COA) report which flagged the transfer of billions of pesos from the Department of Health to the Procurement Service of the Department of Budget and Management (PS-DBM) for the latter’s purchase of medical items at the onset of the pandemic.

“Just like any other taxpayer who had been subject of our tax audit, we will thoroughly check and verify the tax compliance of these 76 taxpayers and be filing appropriate criminal complaints as warranted against those found to have violated the Tax Code,” Dulay said on Friday.

Meanwhile, senators noted in a hearing that day that Pharmally’s failure to produce documents to account for P3.4 billion of its P7.2 billion purchases last year could only mean these were “ghost deliveries.”

“We can conclude there are ghost deliveries. We can conclude there’s money laundering,” Gordon said during the 16th hearing of the Senate inquiry into the government’s procurement deals, of which more than P11 billion went to Pharmally in 2020 and 2021.

Gordon once again expressed exasperation with detained Pharmally executives Linconn Ong and Mohit Dargani, who claimed they did not know where the company kept its books.

For their failure to locate those books, the two were ordered transferred to the Pasay City Jail on Monday.

Ong and Dargani maintained they had no knowledge of the whereabouts of the boxes of Pharmally’s accounting records, which they initially promised to locate and submit to the panel.

“We both don’t know where they are kept. I left in August, he (Ong) got detained in September. We lost our employees. We didn’t know where to start,” Dargani said to Sen. Risa Hontiveros’ question as to why they couldn’t produce the documents.

“Then why did you bother to request to talk to Ong?” Hontiveros asked him.

Dargani replied: “To try to see if he has any recollection where the boxes are.”

The senator again inquired if the two really took the effort to determine where the documents were.

Turning to Ong, Hontiveros said “So you’d rather go to the common area of the Pasay City Jail than do something to change the course of events?”

A defiant Ong answered “We’re not criminals. I really don’t know where the documents are. Since the chairman has come to a conclusion, then just file charges against us.”

“Is there a possibility there were no actual stocks delivered? Because it appears that they have nothing to show for it,” Gordon asked Raymond Abrea, a certified public accountant and chief strategy officer of Abrea Consulting Group, whose assistance was requested by the blue ribbon panel.

“Based on documents, yes, there is no record [of such deliveries being made],” Abrea replied.

“Would I be within my conclusion that the country was swindled and there were ghost deliveries?” asked Gordon.

Abrea said: “It’s possible, Mr. Chairman, because there are no documents.”

“Therefore, the BIR can go after them,” Gordon said, drawing an affirmative answer from the resource person.

On Friday, Abrea reiterated some of the points he made at a hearing on Nov. 4 when he told senators that the undercapitalized company declared P7.2 billion in total purchases in its audited finance statement (AFS).

But Pharmally’s income tax return (ITR) for 2020 reflected only P3.8 billion in purchases, including P600 million in imports, Abrea said.

There were no documents to account for the P3.4-billion difference between the amounts reported in the ITR and the AFS, he said.

Pharmally’s external bookkeeper, Jeff Mariano, testified that he saw the supporting documents to the transactions but said he had not been furnished copies.

He explained that he only went to Pharmally’s offices where the documents were kept.

Dargani insisted that all the items were delivered to the PS-DBM.

Pharmally’s Singaporean chair and president Huang Tzu Yen, testifying from Singapore, promised Gordon he would try to “compile whatever evidence we have.”

Huang apologized to the committee, acknowledging his firm’s lapses in documentation, since it was only a startup, he said.

“It’s not an apology we need, it’s accountability by the corporate members,” Gordon said.

“I believe it should be accountability within SEC (Securities and Exchange Commission) and BIR rules. Please forgive us as it’s our first venture, as you can see from our documentation,” Huang said.

“You’re a very kind man. You always come to the rescue of your people,” Gordon said.

Ong also insisted there were no ghost deliveries.

“I assure you the items were delivered. We have DRs (delivery receipts), and we have already submitted the DRs to this committee,” he told Gordon.

But the senator said the panel could not trust those receipts, considering that a former PS-DBM employee previously admitted that he had been ordered to sign inspection reports for China-made personal protective equipment on at least two occasions before any deliveries were made.