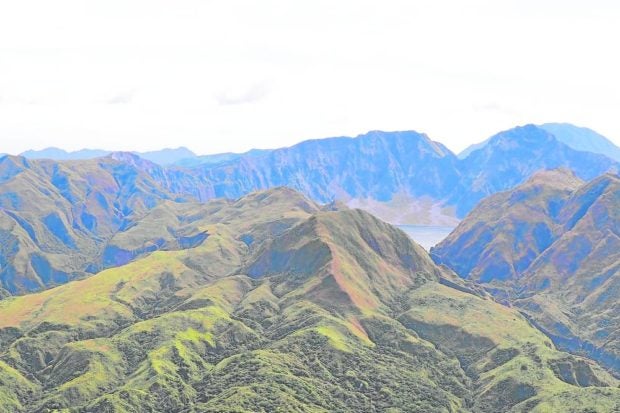 ALL QUIET AT THE LAKEFRONT This photograph of Mt. Pinatubo’s crater lake taken on Dec. 2 on the side of Botolan town in Zambales shows no visible signs of steam or steam vents. —PHOTO COURTESY OF ZAMBALES FOR THE PEOPLE

CITY OF SAN FERNANDO—An assessment of Mt. Pinatubo from the sides of the provinces of Zambales and Tarlac showed no sign that it would erupt similar to its violent blasts 30 years ago, officials said on Friday.

Two teams dispatched by Zambales Gov. Hermogenes Ebdane Jr. did not find strong sulfuric smell, fresh ashfall deposits and wild animals fleeing from Mt. Pinatubo’s summit, which are all indications of an imminent eruption, Noel Lacadin, chief geologist of the Mines and Geosciences Bureau (MGB) in Central Luzon, told the Inquirer in a phone interview.

Lacadin led the teams that went to Botolan town’s villages of Villar and Patal Pinto, both of which are within the 10-kilometer radius of the volcano.

The MGB is part of the Task Force Pinatubo that Ebdane created after the Philippine Institute of Volcanology and Seismology (Phivolcs) confirmed that the volcano had a “weak explosion” at noon of Nov. 30.

Local governments around Pinatubo have since banned anyone from accessing the volcano and its crater lake, which was reopened to tourists barely a month ago.

Ebdane, a former chief of the Philippine National Police, set up a command center in Iba, the capital town of Zambales, and a monitoring camp in Botolan with the police, the military and mayors.

According to Lacadin, Aeta elders and leaders recounted seeing no signs of disruption in the water levels or flows on streams near the crater lake on or before Nov. 30.

There was also no strong earthquake that day but the Aeta tribesmen confirmed seeing “clouds” northwest of the crater lake, a 3-km-wide bean-shaped body of water that was formed when the summit of the 1,745-meter-high volcano collapsed after its massive eruption on June 15, 1991.

Peter John Encarnacion, head of the Provincial Disaster Risk Reduction and Management Office, also said he did not find steam on the crater lake when the Philippine Air Force flew him over Mt. Pinatubo on board a helicopter on Thursday.

“The crater looks calm and water is still intact,” he added.

In a separate interview, Dr. Renato Solidum, undersecretary of the Department of Science and Technology and officer in charge of Phivolcs, said no eruption was in progress because there was no sign of magma rising from the bottom of the volcano.

Lacadin likened the Nov. 30 blast to “a boiling pressure cooker where the lid was opened before the liquid simmered down.”

“Steam water might have touched the hot rocks,” he added.

On Aug. 12, Phivolcs lowered the alert status of Mt. Pinatubo from alert level 1, or low-level unrest, to alert level 0 as earthquakes and chemical parameters decreased.

The agency has not designated a permanent danger zone on the volcano although the hazards of landslides and mudflows are known after the 1991 blasts.

Aetas consider the volcano the home of their deity Apo Namalyari and have settled back in for good or return during planting seasons.

Read Next
3M vaxxed in Calabarzon, Bicol, Visayas
EDITORS' PICK
PH to import 60,000 tons of fish to cover shortage
Gear up and get ready to play with Yamaha Mio Gear
Over 3 Million worth of prizes to be won at Smart Padala’s SENDali Manalo Promo!
Acer starts the year off strong with the Aspire Vero National Geographic Edition
#VotePH2022: COVID, power woes loom as poll concerns
Workers are exempted from ‘no vax, no ride’ policy – DOLE chief
MOST READ
1Sambayan names 7 aspirants in its 2022 Senate lineup
Cold-case investigation names surprise suspect in Anne Frank’s betrayal
Guevarra to Acosta: Obey rules on unvaccinated
Emma Stone calls Andrew Garfield a ‘jerk’ after he ‘lied’ about his ‘Spider-Man: No Way Home’ appearance
Don't miss out on the latest news and information.