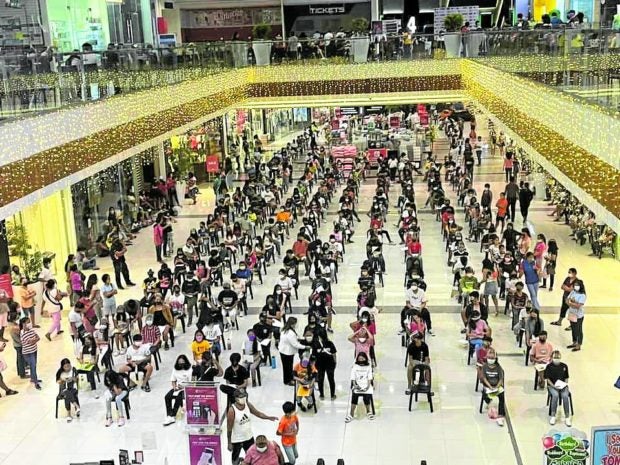 Residents troop to a vaccination site set up at Robinsons Mall Ilocos in Laoag City during the first day of the national COVID-19 vaccination drive. (PHOTO COURTESY OF PHILIPPINE INFORMATION AGENCY ILOCOS NORTE)

MANILA, Philippines — A total of 55,415,753 individuals or  71.84 percent of the Philippines’ target population have already been vaccinated with at least one COVID-19 vaccine dose as of December 1, the National Task Force (NTF) against COVID-19 reported.

Of the over 55 million individuals who have received at least one dose of the vaccine, 36,869,419 are now fully vaccinated, said NTF.

Metro Manila recorded the highest vaccination coverage, having administered at least one dose to 112.16 percent of its target population.

Six other regions have administered at least one dose to more than 70 percent of the target populations—Cordillera Administrative Region, Ilocos region, Cagayan Valley, Central Luzon, Calabarzon, and Northern Mindanao.

The NTF likewise reported a total of 7,628,432 doses administered throughout the country during the three-day National Vaccination Days from November 29 to December 1.

The NTF also said the Philippines clinched the fourth spot in the global rankings of nations with the highest daily jab rate after the country administered 2,713,731 vaccine doses on November 29.

“But if you’re going to look at this in terms of population, number one tayo kasi 110 million lang tayo [compared to] India and China na nasa one billion ang population. Kaya I hope we are able to sustain the momentum,” Health Secretary Francisco Duque III said Thursday.