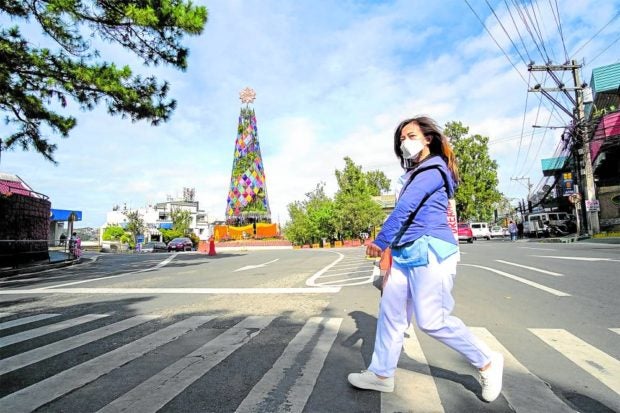 PEAK SEASON STARTS The unveiling of the giant Christmas tree on Session Road every Dec. 1 marks the start of the peak tourism season for Baguio City. Business is starting to pick up as local hotels are booked for December, with more people wanting to spend their Christmas holiday in the summer capital. —NEIL CLARK ONGCHANGCO

BAGUIO CITY—With this city reaching its vaccination target for herd immunity against COVID-19, tourists have become comfortable and confident to travel again, as the summer capital began drawing roughly 5,000 visitors daily, an official said on Wednesday.

The number of fully vaccinated residents here has reached 83 percent (235,054) of the 281,000 target population and nearing the 95-percent target set by Mayor Benjamin Magalong, City Administrator Bonifacio dela Peña said in a briefing.

Data also showed that 97.7 percent (274,551) of the target population had received at least their first dose of the vaccine, Dela Peña said.

“We have achieved herd immunity and that is why we have reopened the economy,” he said, responding to apprehensions of locals about the deluge of visitors.

Last weekend, city officials estimated the number of guests to have reached 10,000.

Officials are monitoring COVID-19 cases in the city due to the threat from the new and highly contagious Omicron variant, Dela Peña said.

Magalong had discouraged people from gathering for the ceremonial lighting of Baguio’s Christmas tree on Session Road and a symbolic “bonfire” at the city’s Malcolm Square on Wednesday night. But families still turned up to enjoy the show as well as stroll on Session Road, which was closed to traffic for the event.

Only three new infections were recorded here on Wednesday, which raised Baguio’s active COVID-19 cases to 91 out of the total 29,955 cases tallied since last year. In September, when a surge in infections struck the country, Baguio recorded as many as 4,000 active cases.

Dela Peña confirmed that most of the city’s hotels were booked for December, the start of Baguio’s peak tourist season.

He said the city had set a new entry cap of 3,000 tourists from the previous 2,000, who must be fully vaccinated and who must submit to triage before entering the city’s borders.

The cap represents the capacity of the city triage to examine leisure travelers but the government has authorized some hotels to conduct their own triage procedures for their guests, Dela Peña said.

This week, two bus companies have applied to reopen routes to Pangasinan and the Ilocos provinces because of the high visitor traffic to Baguio, he added. —VINCENT CABREZA