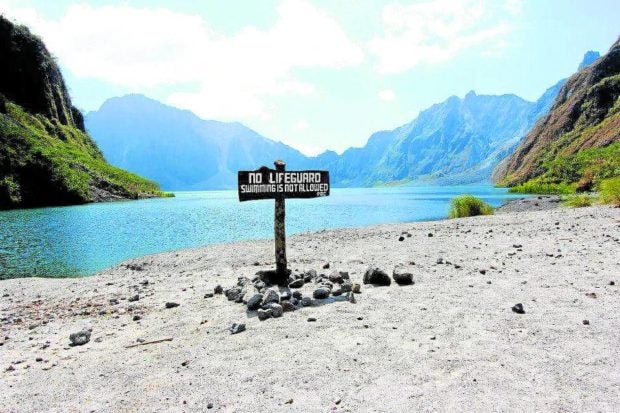 PROHIBITED The crater lake of Mt. Pinatubo is a popular spot for trekkers and campers but the local government of Capas, Tarlac, put up signs in 2016 to stop visitors from swimming there. —PHOTO COURTESY OF CAPAS MUNICIPAL GOVERNMENT

MABALACAT CITY—The mayor of Capas town in Tarlac province has ordered the suspension of all tourism activities around the 2-kilometer lake of Mt. Pinatubo following a phreatic (steam blast) eruption on the volcano on Tuesday.

Mayor Reynaldo Catacutan, in a video posted on social media on Wednesday, said he had directed the local police and the municipal public safety office, in coordination with the Philippine Air Force command stationed in the town, to prohibit the entry of tourists, tour organizers and Pinatubo tourism workers into the volcano’s vicinity.

Tourists on their way to the crater lake pass through the village of Sta. Juliana in Capas, the most popular route to the peak of Pinatubo, which straddles the boundaries of Tarlac, Pampanga and Zambales provinces.

Catacutan also asked for the understanding of those who earn from Pinatubo trekkers, saying the local government needed to heed the call of the Philippine Institute of Volcanology and Seismology (Phivolcs) to stop people from going near the lake.

He also appealed to Aetas living on the slopes of the volcano and other upland areas in the town to avoid the crater lake and, if needed, transfer to safer areas.

For more than two decades, Sta. Juliana has served as the main gateway toward the crater lake where tourists can board off-road vehicles on their way to the trekking area of the volcano.

Mt. Pinatubo’s crater lake was formed when rainwater pooled at the volcano’s summit, which collapsed after the eruption on June 15,1991. Due to its turquoise water, it has become a popular tourist destination in Central Luzon.

According to Phivolcs, the weak explosion on Pinatubo on Tuesday could be due to hydrothermal processes, or when water comes into contact with the magma underneath a volcano.

This kind of blast happens when extremely hot magma heats groundwater or surface water, Phivolcs said in an advisory on Tuesday.

The municipal governments of Botolan and San Marcelino, both in Zambales, have been placed on alert following the phreatic explosion.

Botolan Mayor Doris Maniquiz-Jeresano told residents there was no indication of a volcanic eruption, citing the advisories of Phivolcs that the weak explosion was steam-driven. But she also directed residents to prepare as part of their contingency plan.

Tourist activities on Mt. Pinatubo were suspended in April last year. It resumed in October this year after COVID-19 cases in Pampanga went down.