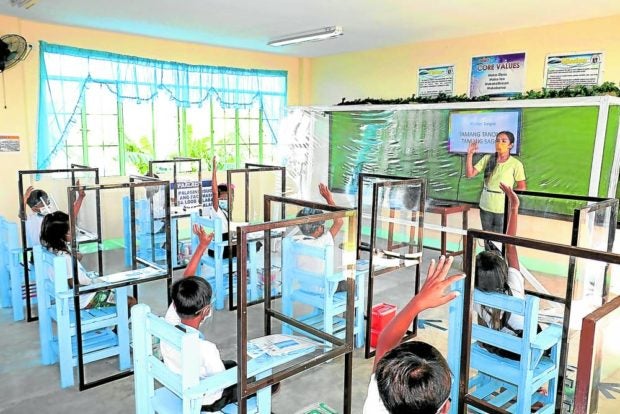 MANILA, Philippines — The Department of Education (DepEd) on Thursday said that no COVID-19 cases were reported during the first week of the pilot implementation of face-to-face classes in the country.

However, Assistant Secretary for the National Academy of Sports and Field Operations Malcolm Garma noted that some students were reported to have had a fever, noting that parents followed guidelines ensuring the safety of students and other personnel in the participating pilot schools’ operations.

(Although there were reports that some of the students had a fever, it means it is clear to us parents that when children experience these symptoms-cough, cold, fever, sore throat – they don’t let them go to school anymore.)

“I think this is one of the things which we should highlight in terms of orientation and the knowledge of parents regarding the symptoms,” she added.

According to DepEd, there were a total of 4,537 learners in Kinder to Grade 3 and Grade 11 to 12 who attended the first week of the pilot run, based on the partial result of the weekly school reporting on the limited F2F classes as of Nov. 24

But Garma explained that these numbers may still change as it validates its data from its Learner Information System and Plantilla Items for schools participating in the pilot face-to-face classes.

Based on the latest report dated Nov. 24 from the Planning Service on the pilot run assessment, DepEd said 60 percent to  62 out of 100 schools have already submitted their Week 1 assessment report covering November 15 to 19, 2021.

“This is understandable because many of the 100 pilot schools are in remote areas with either weak or no internet signal at all,” said DepEd.

Meanwhile, DepEd Secretary Leonor Briones commended all those involved in the pilot run of the classes.

“We would like to commend the tremendous efforts that our valued stakeholders have provided for the successful and safe pilot run of limited face-to-face classes. The involvement of everybody is crucial to the expansion of the implementation,” said Briones.

The pilot run of face-to-face classes started on Nov. 15. The DepEd said it plans to expand its implementation to more areas and schools by March 7.