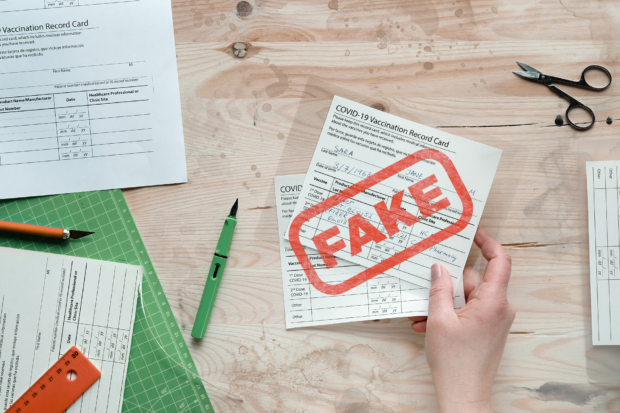 CAGAYAN DE ORO CITY — Authorities in Cagayan de Oro and Iligan cities have warned the public against buying fake vaccination cards, urging them to instead get vaccinated for free rather than pay for a counterfeit document and be penalized if they get caught.

“The vaccination is for everyone’s protection (and rather than find loopholes) they should be vaccinated. What good will it do for them if they do this?” Cagayan de Oro Mayor Oscar Moreno said.

Those who sell and those who buy the fake documents, according to Moreno, are not only deceiving themselves but risking their families and neighbors to infection.

Although now under Alert Level 2 after successfully reducing to single digit the rate of COVID-19 infection following a surge from June to September, the local government here has tightened the rules for the movement of people in a bid to help increase the demand for vaccination.

Malls and other commercial establishments now require the presentation of vaccination cards before people are allowed entry.

This policy has driven throngs of people to line up for vaccine shots, ramping up the average daily vaccination coverage to over 10,000 towards the end of November. This further rose to over 20,000 daily during the three-day national mass vaccination drive.

Despite this, there are still people who continue to refuse vaccination, making them vulnerable to the sale of the illegal document.

The vaccination card indicates the date of one’s inoculation and the brand of vaccine that was administered. The one issued by the City Health Office also comes with a QR code and photo of the recipient.

Last November 29, operatives of the Criminal Investigation and Detection Group-10 (CIDG-10) arrested a woman for selling a fake vaccination card in a buy-bust operation in Barangay Bulua here.

Confiscated from the suspect, whose identity the CIDG did not disclose, were two marked P100 bills, various cash bills totaling P2,500, five vaccination cards that appeared to be fake, a laptop, a printer, a laminating machine, and a paper cutter.

Maj. Evan Viñas, city police spokesperson, warned that those who are convicted of falsifying documents could get imprisoned for up to two years and be fined at the same time.

Viñas said they are now tracing the links of the arrested woman.

In Iligan City, where the “no vax, no entry” rule is strictly imposed, police are piecing information that could lead to a network of operators producing fake health documents.

Panolong identified the suspects as Rosalie Canoy Bucao and Joel Demores Emphasis. The duo allegedly sold each card for P700.

Dr. Belinda Lim, city emergency operations manager, said they have intensified the inspection of vaccination cards not just in malls but also in checkpoints for those entering Iligan from Lanao del Sur, Lanao del Norte, and Misamis Oriental provinces.