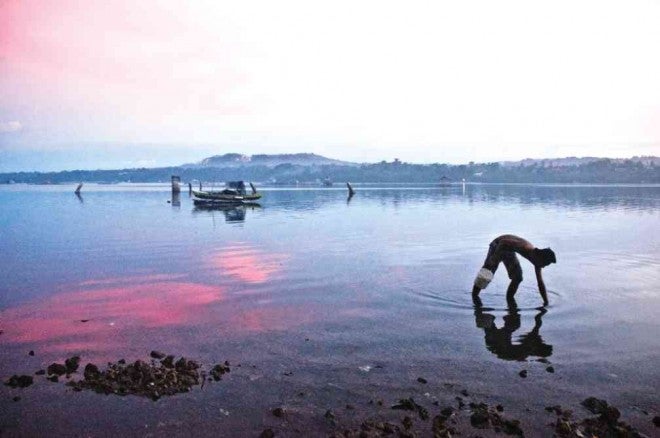 FILE PHOTO: Bohol folk collect seashells despite a red tide scare in Tagbilaran Bay. In the background is Dauis town in Panglao Island. The BFAR has already banned the gathering and sale of shellfish from areas in Bohol contaminated with red tide toxins. SHERWIN SAPONG/CEBU DAILY NEWS

MANILA, Philippines — The Bureau of Fisheries and Aquatic Resources (BFAR) on Thursday reported that Carigara Bay in Leyte and Litalit Bay in San Benito, Surigao del Norte, have been added to the list of coastal areas in the country that are positive for red tide toxins.

In an advisory, BFAR said that shellfish collected in the following areas remain positive for paralytic shellfish poison (PSP) or toxic red tide that is beyond the regulatory limit:

According to BFAR, all types of shellfish or acetes (alamang) gathered from the areas mentioned are not safe for consumption.

However, fish, squids, shrimps, and crabs are safe as long as they are fresh and washed thoroughly, and their internal organs such as gills and intestines are removed before cooking.

The term “red tide” is used to describe the algal bloom phenomenon wherein the water is discolored by high concentrations of toxic and nontoxic algae in the water.

#RedTidePHShellfish Bulletin No. 33 Series of 202102 December 2021Based on the latest laboratory results of the…

Posted by Bureau of Fisheries and Aquatic Resources Central Office on Thursday, December 2, 2021

Read Next
Duterte says he respects Go’s decision to back out of 2022 presidential race
EDITORS' PICK
Writers’ groups join outcry over KWF move
A laptop that maximizes your WiFi so you can maximize your productivity
WHAT WENT BEFORE: School libraries targeted first
House energy committee chair Arroyo bats for cheap electricity
Authors unbowed after gov’t ‘purge’ of books
Powered by style, innovation and passion
MOST READ
Actor Anne Heche ‘brain dead’ after crash – US media
Ex-DBM exec Lao of Pharmally mess tagged in overpriced DepEd laptops
SC: Natural-born dual citizens may not renounce foreign citizenship
DA exec quits after ‘illegal’ resolution on sugar importation
Don't miss out on the latest news and information.