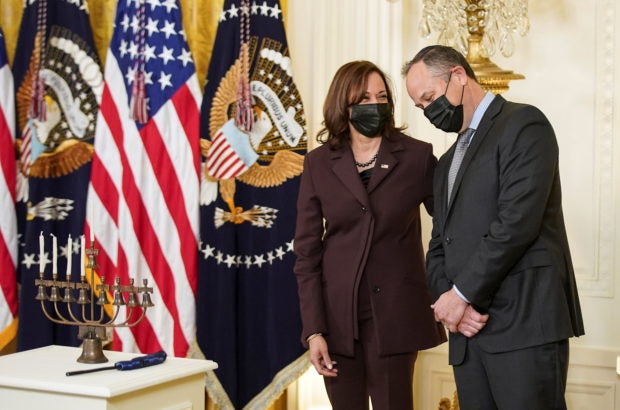 Second gentleman Doug Emhoff, the first Jewish spouse of a president or a vice president, and his wife U.S. Vice President Kamala Harris, stand beside a menorah during a Hanukkah celebration at the White House in Washington, U.S., December 1, 2021. REUTERS

WASHINGTON — U.S. President Joe Biden on Wednesday presided over the first White House Hanukkah celebration with the Jewish spouse of a vice president, commemorating the Festival of Lights with a significant milestone.

Second gentleman Doug Emhoff, who is Jewish and married to Vice President Kamala Harris, took the opportunity to draw parallels between Jewish and American ideals.

“As the first Jewish spouse of an American President or Vice President, celebrating Hanukkah…it is humbling,” he said. “Our history, our values as Jews, are an essential part of who we are as Americans. Jewish values are American values.”

Hanukkah, Hebrew for “dedication”, commemorates the 2nd century BC victory of Judah Maccabee and his followers in a revolt in Judea and the ensuing restoration of the Jewish temple in Jerusalem.

Light is a main theme of the eight-day festival because, Jewish tradition says, the Maccabees found only enough ritually pure oil to fuel the temple’s ceremonial lamp, The Menorah, for one day, but it burned for eight days.

The Menorah featured at the White House event commemorating the fourth night of the holiday was known as the Liberty Bell menorah, designed by Holocaust survivor Manfred Anson in honor of the iconic bell in Philadelphia, the White House said.

In his remarks, Biden quoted Dr. Rabbi Aaron Glatt who described Hanukkah as “Thanksgiving on steroids” but also took a more somber tone to touch on recent flare-ups of anti-semitism in the United States.

“We need to stand against a resurgence of this type of anti-semitism and other forms of intolerance and hate,” he said.