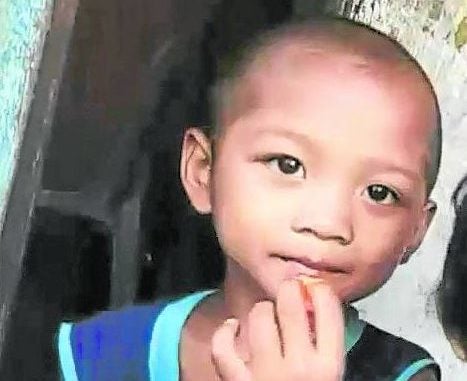 MANILA, Philippines — Six-year-old Mark Jacob Untalan and his mother, Marchelle Paragas, had to leave their house in Pangasinan and move in with their relatives in Quezon City, to make it easier for him to seek treatment at Philippine Children’s Medical Center (PCMC).

Untalan was diagnosed with acute lymphocytic leukemia in November 2020 after he turned pale, developed contusions (pasa) all over his body while his stomach became bloated.“I asked myself, ‘Where did he get this illness?’” Paragas told the Inquirer. “He was such a lively kid.”

With both of them in Quezon City as her son undergoes chemotherapy at PCMC, Paragas’ partner, Kevin Untalan, had to quit his job as a construction worker to care for the couple’s two other children in Pangasinan.

Kevin, the sole breadwinner in the family, now relies on scavenging recyclables from trash and selling them to junk shops to earn money.

Paragas, on the other hand, is jobless and said she depended on donations to pay for her son’s chemotherapy with each cycle costing P76,332.20. On top of this, both of them need to be tested for COVID-19 as required by the hospital every time he seeks treatment.

“Sometimes, I can’t push through with the treatment because I can’t pay for [the swab tests] and nobody wants to help,” Paragas said. “It’s really hard for me because I don’t know where to get the money.”

Because of the harsh effects of chemotherapy, Untalan feels weak and suffers from headaches, making it difficult for him to work on his modules from school.

But despite this, he continues to brave each chemotherapy session.

“He really likes it. He says it’s because he wants to get better,” Paragas said.

And someday, much like many other boys his age, her son wants to become a police officer.

“Whenever I ask him what he wants to be when he grows up, he says he wants to be a police officer to catch the bad guys. Just like that, he makes me laugh,” she added.