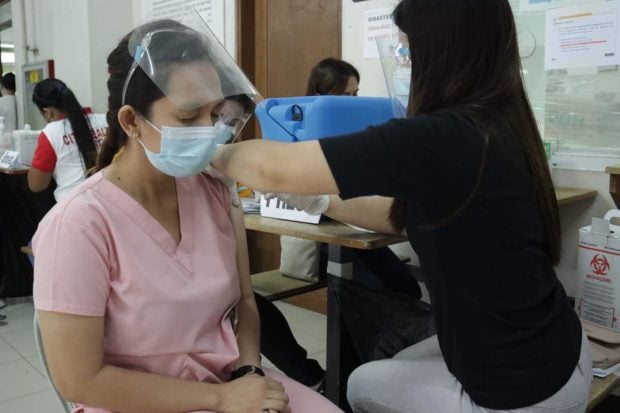 A medical worker of the Rafael Lazatin Memorial Medical Center in Angeles City gets her booster shot against COVID-19. (Photo courtesy of the Angeles City government)

He said the emergency use authorization (EUA) for COVID-19 boosters for them was approved on Monday “based on the assessment of benefit and risks, similar to US CDC (Centers for Disease Control and Prevention) recommendations.”

He added that the Department of Health (DOH) would soon release the specific guidelines on boosters for the general population.

Health Undersecretary Myrna Cabotaje, who heads the National Vaccination Operations Center (NVOC), confirmed the expansion of the booster program and said the government was just finalizing the guidelines.

“In the next couple of days, we will have the boosters for all the 18 years old and above,” she said in a televised briefing.

Secretary Carlito Galvez Jr., the country’s vaccine czar, said the booster shots for the general adult population might be given as early as Dec. 10.

He said the national government allowed the administration of booster doses to the remaining priority groups and the rest of the general population as “we have more than enough” vaccine supply.

According to Galvez, the country was set to receive 217 million doses of COVID-19 vaccine this year, both procured and donated. As of Wednesday, the Philippines has received 66 percent or more than 144 million doses, the latest of which were the 1.6 million doses of AstraZeneca vaccine donated by the French government.

Vaccination of minors aged 5 to 11 would also push through this month, instead of next year.

But Cabotaje emphasized that it was still important for the unvaccinated to get their first dose, and those who had their first shot to complete their vaccination.

More than five million people have so far received the COVID-19 vaccine in the first two days of “Bayanihan, Bakunahan,” the government’s three-day campaign to inoculate nine million individuals at 8,000 sites nationwide.

She said that some regions increased their vaccination coverage by three to four times their usual daily accomplishment.

She cited the case of the Bangsamoro region, which administered some 59,000 jabs compared to the 10,000 to 12,000 shots it usually administered.

According to the health official, a total of 2.71 million doses were given on Monday, the first day of the vaccination campaign.

Based on reports received as of 6 a.m. on Wednesday, 2.29 million jabs were administered on Tuesday, a holiday celebrating Andres Bonifacio day.

“Our numbers show that the figure is lower (than the three million target). But these are not the final numbers yet. We are expecting more data later,” Cabotaje said.

“Some were saying that it helped that it was a holiday yesterday and many people were able to go to the vaccination sites for their shots. But there were also feedbacks that since it was double pay, they opted to work,” she added.

Cabotaje said the government remained optimistic that it would be able to meet its target for the three-day inoculation drive.

“We are still hopeful that we will meet our nine million target. But just in case we will be unable to reach it, this record is already high,” she said, noting that only a million COVID-19 shots were usually administered daily.

The pandemic task force wanted to extend the three-day national vaccination drive as it conceded that it would not reach the target of jabbing nine million people.

Galvez said in a presser on Wednesday that the National Task Force Against COVID-19 (NTF) recommended to President Duterte to extend the activity by two more days or until Friday.

He said that with the current pace, “we are looking that we can achieve 7.5 million to 8 million” at the end of the three-day vaccination drive on Wednesday.

Cabotaje said they wanted to improve the vaccination process to accommodate more people for another round of inoculation drive later this month.

She said the NVOC would try to convince local government units to do away with the preregistration requirement in the next round of mass vaccination days planned on Dec. 15 to 17.

“We want to make the process easier, we will increase the areas for [on-the-spot] registration [for walk-ins] because that is the reason behind the complaints about not being accommodated, and why there are long queues. While we appreciate that our local governments want to have preregistration, we can see that they do not really need to preregister.

“We need to look at improving the process for accommodating walk-ins, and we also need to increase registration areas given the long queues,” she said, adding that there was also a need to ensure that operating hours of vaccination centers would not be cut short.

“Vaccination centers shouldn’t close early. No one among those in line should go home without getting vaccinated. Vaccination should continue as long as there are people lining up,” Cabotaje pointed out.