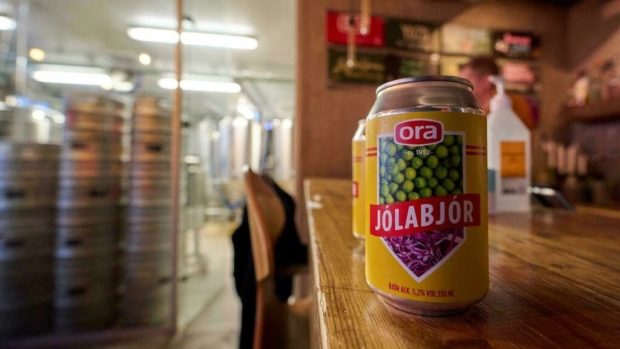 REYKJAVIK — A Christmas beer made from green peas and marinated red cabbage has become a festive hit in Iceland, flying off the shelves within hours.

Made by a small Reykjavik brewery, the recipe for “Ora Jolabjor” — Ora Christmas Beer — is inspired by Iceland’s Christmas dinner.

The new ale, which has 5.2-percent alcohol content, is the brainchild of Valgeir Valgeirsson, a master brewer at RVK Brewing.

He has made a name for himself in past years by developing popular Christmas beers made from algae, Christmas tree trunks and even dried fish.

The fish beer “was strange,” the 41-year-old brewer with a salt-and-pepper beard admitted.

Sold out within hours

This time around, the peas and cabbage were mixed with malt, hops and cloves.

Valgeirsson’s brewery has an annual capacity of just 50,000 liters—a drop in the ocean compared to the output of international beer conglomerates.

He whipped up 6,000 liters of his latest concoction, which were then sold online at Iceland’s state-run alcohol monopoly Vinbudin.

Valgeirsson said the idea began fermenting in his mind six months ago after he got a call suggesting a tie-up with Ora, Iceland’s biggest food manufacturer, for a Christmas beer.

“The challenge was something that I was seeking,” he told Agence France-Presse (AFP).

The beer can actually resembles Ora’s packaging for its tins of peas and red cabbage.

While it may not sound appetizing as a beverage, the combination of peas and cabbage is highly symbolic for Icelanders.

The tradition of eating the two side dishes at Christmas dates back to the days when fresh produce was hard to come by in winter.

Valgeirsson’s unusual combination of ingredients has spurred a wave of curiosity.

“I was surprised by how good it tasted and how pleasant it was,” said Hedinn Unnsteinsson, a 51-year-old government adviser, who admitted that the beer did have a pronounced smell.

Niels Bjarki Finsen compared it to an English bitter ale and said he had expected the veggie ingredients to have a more distinctive taste.

Thorsteinn Tomas Broddason, who works in finance, joked that he expected more strange flavors in years to come.