Issue up in caucus of Senate
By: Christian V. Esguerra - @inquirerdotnet
Philippine Daily Inquirer / 12:10 AM February 27, 2012 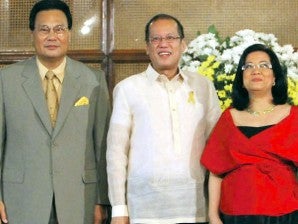 Senator Miriam Defensor-Santiago on Sunday cautioned against the prosecution’s insistence to have Sereno appear as its witness in the impeachment trial of Chief Justice Renato Corona.

“Even if she’s willing to testify alone, it would be a slippery slope. It would open the door for other Supreme Court justices appearing in an impeachment trial over one pretext or another,” Santiago told the Philippine Daily Inquirer in a phone interview.

“When the time comes for the defense to present its case, what would prevent them from inviting other justices who, as you say, were critical of Justice Sereno’s dissenting opinion? The prosecution can’t claim this (privilege) alone.”

Senate Majority Leader Vicente Sotto III said he would give a “word of caution” to fellow senator-judges when the caucus took up the matter at 11 a.m. today.

“There might be a conflict within the Supreme Court and we might only worsen it,” Sotto said in Filipino in a separate interview.

Prosecutors want Sereno, an appointee of President Benigno Aquino III, to testify on her dissenting opinion on the effectivity of the high tribunal’s Nov. 15, 2011, temporary restraining order (TRO).

Bayan Muna Representative Neri Colmenares on Sunday said he would file a motion for reconsideration of a February 14 resolution issued by the high tribunal that the court could “not waive privileges attendant to the proposed testimony” of its officials and employees in Corona’s impeachment trial “on matters covered by privilege and confidentiality.”

“It is absurd,” Colmenares said. “This practically means that anyone, from Chief Justice to Supreme Court drivers cannot testify.”

He said the prosecution would press the Senate to subpoena court officials, otherwise it would weaken its power to try impeachment cases.

Justice Secretary Leila de Lima dwelt heavily on Sereno’s dissenting opinion when she testified last week as part of the prosecution’s effort to show that Corona had favored former President and now Pampanga Representative Gloria Macapagal-Arroyo through the issuance of the TRO. The Senate ruled that De Lima’s testimony was “hearsay” and that the best evidence was Sereno’s dissenting opinion.

Sereno argued that the TRO was “legally ineffective” because Arroyo’s camp had failed to comply with the condition requiring her to appoint a legal representative “who will receive subpoena, orders and other legal processes on their behalf during their absence.”

The wording in Arroyo’s appointment of Ferdinand Topacio as her counsel was “to produce summons or receive documentary evidence,” which Sereno interpreted as an absence of “faithful compliance.”

But the Supreme Court en banc later “resolved to clarify that the TRO was not suspended even with the finding that there was no full compliance with the conditions of the TRO.”

Defense lawyer Ramon Esguerra yesterday said his camp would not seek the testimony of Abad and Velasco in case the prosecution succeeded in presenting Sereno. He said the defense would “simply highlight the significant portions of the opinion that will refute what Justice Sereno said.”

Esguerra said Sereno could also be questioned on her statement of assets, liabilities and net worth (SALN).

Critics of Sereno have said that she did not include in her statement her earnings as a lawyer in the legal proceedings surrounding the controversial Terminal 3 of Ninoy Aquino International Airport.

In case Sereno testifies, Esguerra said “she has to admit that her opinion is not the majority and the points raised against her dissent by Justices Abad and Velasco.”

“She will be asked about what she discussed about the case with Secretary De Lima, which the latter intimated in her testimony last week,” he added.

Esguerra was referring to De Lima’s claim that she had learned that Corona had sent handwritten corrections to the resolution prepared by Velasco. Corona allegedly made it appear that Arroyo had complied with the conditions of the TRO.

Abad also wrote that “it is not true that the court or the Chief Justice has declined to promulgate Justice Sereno’s dissenting opinion following the vote taken in the case on Nov. 29, 2011.”

“Consequently, the court promulgated its November 29 resolution in the case without Justice Sereno’s promised dissenting opinion,” he said.

“The court did not deny her the right to have her opinion promulgated together with the main resolution.  She broke agreement by not submitting it on the date set for it.”

Abad and Velasco said Sereno “breached” the Internal Rules of the Supreme Court (IRSC), particularly the “confidentiality of court sessions.”

Wrote Abad: “Justice Sereno has breached this rule, narrating in her dissenting opinion her recollection of the en banc’s deliberation in executive session on the effect of the petitioners’ failure to comply with the second condition” of the TRO that the court had issued in the case.

“The court’s deliberations are confidential simply because the court realizes that only by making it so can the justices freely discuss the issues before it. Broadcasting such discussions to the public would have a chilling effect on those who take part in it. One would be careful not to take unpopular positions or make comments that border on the ridiculous, which often is a way of seeing the issues in a different perspective … If our deliberations cannot remain confidential, we might as well close down business,” he added.

In his separate opinion, Velasco recommended “that the portions of the unpromulgated dissenting opinion of Justice Sereno delving on what under the rules are considered confidential be expunged for being violative” of Section 2, Rule 10 of the IRSC.

Santiago, a former trial court judge who was recently elected to the International Criminal Court, said it would be a “game changer if the prosecution insisted on inviting” Sereno.

“The Senate has already made up its mind. Now, they’re taking a different tack. They only want to ‘invite’ a Supreme Court justice. But there’s no significant difference between a subpoena and an invitation because the same issues will still be involved,” she said.

Santiago also described as “out of place” the motion to send “interrogatories,” a list of questions to Sereno.

The senator said the approach was applicable only if, for instance, the “witness is abroad and you cannot make her come back to the country.”

“If the witness is available, you don’t ask for that remedy,” she said. “In this case, the witness is right here so it’s not applicable. It does not conform to the philosophy of the rules of court.” With reports from Marlon Ramos and Gil C. Cabacungan