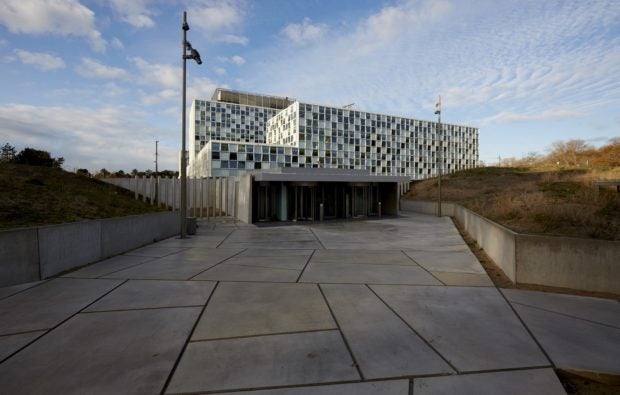 A picture taken on November 23, 2015 shows the new building of the International Criminal Court (ICC) in The Hague, The Netherlands. AFP PHOTO

The relatives of the victims in the government’s war on drugs have formally asked the International Criminal Court (ICC) to resume its investigation into the bloody antinarcotics campaign, saying the local probe being undertaken by the Philippine government had left out President Duterte and other key personalities who should be held liable.

In a 24-page supplemental communication sent to ICC Chief Prosecutor Karim Khan, they said the government’s earlier request for the tribunal to defer action was just “intended to delay, frustrate and abort the ICC proceedings.”

“The overwhelming support of victims for an investigation shows that it is in the ‘interest of justice’ to continue with the ICC investigation,” said the families, who were among those who had filed a complaint for crimes against humanity against Mr. Duterte in the ICC.

Besides, they said, the case review of the drug war killings of the Department of Justice (DOJ) did not cover Mr. Duterte, who had publicly threatened to kill drug personalities even before he was sworn into office in 2016, as well as Sen. Ronald “Bato” dela Rosa, who enforced the campaign when he was still chief of the Philippine National Police.

“The Philippine government’s response shows that the DOJ is deliberately focusing on low-level or marginal perpetrators, despite evidence that President Duterte and high-ranking officials are the persons most responsible for crimes within the court’s jurisdiction,” they said.

This contravened the initial assessment of the Pre-Trial Chamber (PTC) of the ICC that the killings were state-sanctioned, they said.

On Nov. 18, Khan informed the PTC of his decision to temporarily suspend the probe, which the ICC authorized in September, following a request for deferral from the Philippine government. He added that it would seek additional information from the Philippines.

In requesting the deferral of the probe, Philippine Ambassador to the Netherlands Eduardo Malaya reported to Khan that the DOJ had begun examining 52 police operations that led to the deaths of drug suspects.

Governments can ask the ICC to defer a case if they are implementing their own investigations and prosecutions for the same acts.

But the complainants, in their pleading on Tuesday, disputed Malaya’s claim that the Philippine judicial system was enough to hold liable the personalities responsible for extrajudicial killings and other abuses.

The supposed “domestic mechanisms” that Malaya stated were “ineffective remedies” to the victims and their families, they said, adding:

“Contrary to the claim of the Philippine government, there is no genuine domestic investigation, much less prosecution, being conducted into crimes against humanity,” they said.

They said the government and its agencies had protected Mr. Duterte from being held accountable for his actions by conveniently invoking presidential immunity even in cases that did not involve criminal or administrative proceedings, such as petitions for writs of amparo and habeas data.

“On this ground alone, the Philippine government is clearly unwilling to investigate him for crimes committed in the (war on drugs) campaign,” the group said.

As of last week, Malacañang had yet to receive a formal request from the ICC for additional information on the drug war. It also reiterated that the ICC has no jurisdiction to probe the government’s campaign against illegal drugs.

Mr. Duterte pulled the Philippines out of the ICC in 2018 and had since maintained that it had no jurisdiction to indict him. But the ICC said it can investigate crimes committed while the Philippines was a member and up until 2019.

—With reports from Inquirer Research and Reuters INQ

Read Next
Gov’t reports lowest daily COVID-19 case tally since July 2020
EDITORS' PICK
Acer starts the year off strong with the Aspire Vero National Geographic Edition
Comelec division junks petition to cancel Marcos COC for president
PH logs 37,070 more COVID-19 cases; over 33K others recover
The best of bayside and city living at SMDC’s Sail Residences
‘Not yet the end’: Lawyer says Marcos Jr’s DQ cases to take lengthy process
Over 3 Million worth of prizes to be won at Smart Padala’s SENDali Manalo Promo!
MOST READ
NBI foils escape attempt of Kerwin Espinosa, two others
Marcos camp ‘extends hand of unity’ after COC cancellation bid is thrown out
Wendell Ramos finally gets to hold his newborn for the 1st time
No vaccine, no French Open for Djokovic, says French Sports ministry
Don't miss out on the latest news and information.