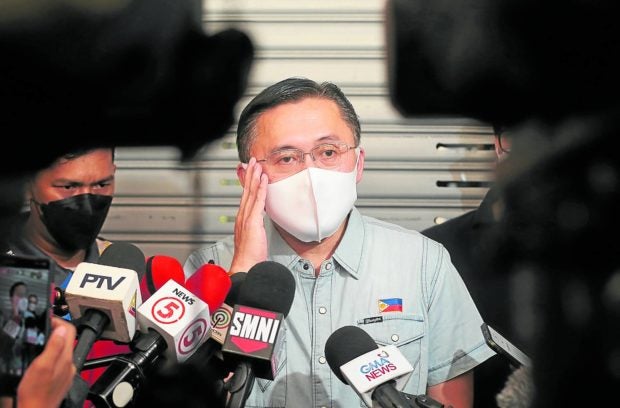 MANILA, Philippines — Sen. Bong Go announced on Tuesday he was pulling out of the presidential race, and another contender, Manila Mayor Francisco “Isko Moreno” Domagoso, said he was “hopeful” of receiving President Rodrigo Duterte’s endorsement.

Go, Duterte’s longtime aide, said he did not want “to make things more difficult” for the president, whose daughter, Davao City Mayor Sara Duterte, is seeking the vice presidency with Ferdinand Marcos Jr. as running mate.

“My love for him is more than the love for a father. He is old and he has given a lot to the country. So I don’t want to add to his problems. I remain loyal to him and I promised to be with him for life,” Go told reporters in Filipino on the sidelines of the Bonifacio Day ceremony at Pinaglabanan Shrine in San Juan City, which Duterte also attended.

He said that with “dirty” Philippine politics, he did not want Duterte suffering the strain of campaigning for him.

Go had earlier telegraphed his decision to pull out. He has to make a personal appearance at the Commission on Elections (Comelec) to make the withdrawal of his candidacy official.

“The law department currently has no authority to accept any filings considering that today (Nov. 30) is a holiday,” Comelec spokesperson James Jimenez told reporters when asked if the poll body’s office would open for the senator.

Go can no longer be substituted because the period for substitution of an aspirant who voluntarily withdraws his certificate of candidacy (COC) ended on Nov. 15.

According to Jimenez, the Comelec is targeting Dec. 15 for the release of the final list of candidates, and the printing of ballots will begin on Jan. 15.Go said he spoke the other night with the President, who, he said, understood his situation.

He said another reason for his pullout was internal conflict: “In the past few days I realized that my heart and my mind are contradicting my actions. My body, heart and mind are really resisting. I’m just a human being who can get hurt and get tired also.”

Go also said his family had objected to his candidacy.

Malacañang had little comment on the matter, with Cabinet Secretary and acting presidential spokesperson Karlo Nograles saying in a TV interview that it was a “new development.”

Nograles said the Partido Demokratiko Pilipino-Lakas ng Bayan (PDP-Laban), the party of President Duterte and Go, would hold “a series of meetings” to discuss Go’s move.

Go was originally nominated by a party faction for president, but he declined it and instead ran for the No. 2 post. At the last minute, he declared his candidacy for president under the little-known Pederalismo ng Dugong Dakilang Samahan. 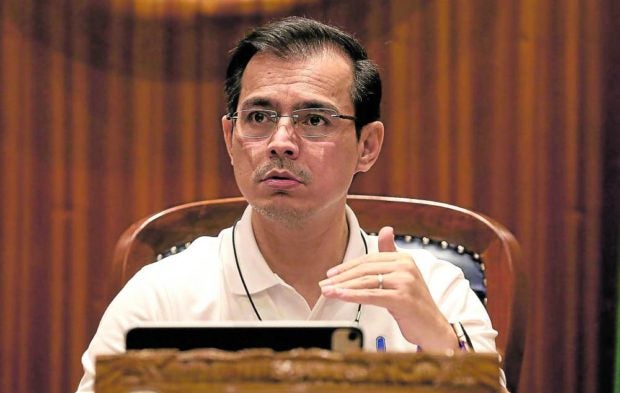 The senator told reporters he had “no ambition” and described his pullout as a “supreme sacrifice” for the country and Duterte, and for the sake of the unity of their supporters.

He sought “forgiveness” from his own supporters, saying: “I was not ready for this … Perhaps it’s not yet my time to be president.”

Asked if Duterte would eventually endorse his daughter’s candidacy, Go was noncommittal. He said he and Duterte would support candidates who could continue the administration’s “good programs.”

“If they endorse me, thank you. Thank you in advance, but I will not preempt them until they say so. For the meantime, I am always hopeful,” the Aksyon Demokratiko standard-bearer told reporters in Manila.

In a chance interview, Domagoso said he would not refuse help from the president or anybody else at this stage of the election season, adding that he needed it badly.

Addressing reporters, he said: “With all honesty, I am expecting that you, too, will help me … I mean literally, like you, you, you.

“I expect all the help, because from the beginning, I needed all the help I could get, because as you know, I’m only one person in public service. I need help from allies, loyalists, believers, followers and volunteers.”

Domagoso said, however, that he would not plead for Malacañang’s anointment.

“I will wait for them to choose me. For the meantime, while I am expecting help, I will keep reaching out. While reaching out, I am learning a lot,” he said.

In October, the mayor described as “fake news” speculations in a Politiko report that he was the administration’s real candidate and Go a mere decoy.

“I thought drugs were illegal — what were they smoking?” he was quoted as saying in an ABS-CBN report, in response to Politiko.

Makabayan senatorial candidate Neri Colmenares, who is the chair of Bayan Muna, said Go’s withdrawal of his presidential candidacy was “a desperate Machiavellian attempt to salvage the crumbling Duterte-Marcos alliance.”

Colmenares said it was obvious from the start that Go, Mr. Duterte’s “chief political operator,” had a slim chance of winning, and that the President was “just using him as leverage to get as many concessions as possible” from Marcos Jr.

He said it was the fate of politicians who “join the Dutertes for their own agenda.”

“May this serve as a warning to all politicians who will seek anointment from the president and his family in 2022,” he said.

Zarate said Go’s move was “not totally unexpected” in the president’s “political playbook,” and that he was “just a pawn used as leverage to gain concessions” from Marcos Jr.’s camp.

The concessions include “protection when Mr Duterte’s term ends … especially now that he is already considered a lame-duck president,” Zarate said.

He added: “The withdrawal will possibly benefit and consolidate further the Marcos and Duterte alliance.

Asked to comment on Go’s pullout from the presidential race, the “UniTeam” of Marcos Jr. and Mayor Duterte said it would reserve its reaction until after “the actual withdrawal of presidential aspirant Bong Go’s COC and his further announcement.”

“We will always be thankful for the access he has given us congressmen these last five years, and we wish him well in helping our country,” Aglipay added.

—WITH REPORTS FROM DONA Z. PAZZIBUGAN AND JULIE M. AURELIO