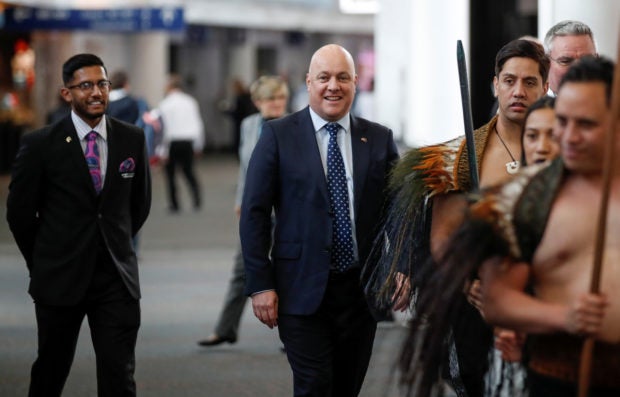 WELLINGTON — New Zealand’s main opposition National Party selected on Tuesday a former chief executive of the national carrier as its new leader to face Labor Prime Minister Jacinda Ardern in the next election expected in 2023.

Christopher Luxon, who helmed Air New Zealand for seven years until September 2019, was elevated to the top job just a year after entering parliament following a leadership crisis at the National Party that has seen four leaders replaced in as many years.

He comes in after Judith Collins, who headed the National’s campaign in its worst election defeat in 2020, was dumped last week.

“Today we are drawing a line under the events of the last four years, and we are putting them behind us,” Luxon said in his speech after he was appointed leader.

Luxon’s elevation will put pressure on Ardern, whose popularity has taken a hit in recent weeks due to a perceived failure in quickly vaccinating the population and growing anger over her government’s tough pandemic curbs and border closures.

Ardern has enjoyed enormous personal support but a recent 1News Colmar Brunton poll showed her rating as preferred prime minister had fallen 5 points from September to 39%.

National has been in turmoil since losing power to Ardern in 2017, besieged by infighting, leadership changes and scandals.

Luxon, 51, held senior roles at global consumer goods firm Unilever before moving to Air New Zealand and leading the airline between 2012 and 2019, during which time it produced consistent profits.

He was elected to Parliament for the Botany electorate only in the 2020 election.

“I have built a career out of reversing the fortunes of under-performing companies and I’ll bring that real-world experience to this role,” he said.

A protege of former Prime Minister John Key, Luxon defended his Christian faith in his maiden press conference saying his faith had been “misrepresented and portrayed very negatively”.

“I want to be very clear, we have separation between politics and faith,” he told reporters.

Luxon has said he does not support euthanasia in a referendum or abortion reform.