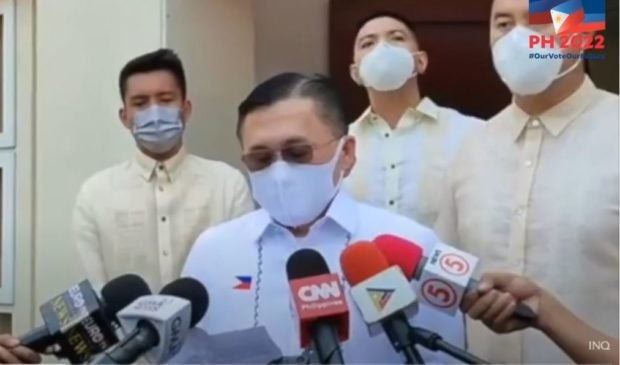 MANILA, Philippines — There will be no substitution for the withdrawal of Senator Christopher “Bong” Go from the 2022 presidential race, the Commission on Elections (Comelec) said on Tuesday.

“Since it would be a voluntary withdrawal, no substitution,” Comelec spokesperson James Jimenez said in a statement.

The poll body’s mouthpiece added that Go is required to physically appear before the Comelec to formalize his withdrawal.

However, any filings would not be accepted on this day as the country commemorates Philippine hero Andres Bonifacio’s 158th birth anniversary.

“The Law Department currently has no authority to accept any filings, considering that today is a holiday,” Jimenez said.

Go announced early Tuesday his withdrawal as a presidential aspirant, saying he does not want President Rodrigo Duterte to be trapped in the middle as the 2022 polls near.

(My family does not want me to run so I thought, maybe this is not my time. Only God knows the right time. I don’t want President Duterte to be trapped in the middle. My love for him is more than that of someone gives to a father.)

“In the past few days, I realized that my heart and my mind are contradicting my actions. Talagang nagre-resist ang aking katawan, puso, at isipan. Tao lang po ako na nasasaktan at napapagod din,” he added.

(My body, heart, and mind are resisting. I’m just human, getting hurt and tired.)

Go, Duterte’s long-time aide, earlier pulled out his candidacy from the vice presidential race to run for the country’s highest post under the Pederalismo ng Dugong Dakilang Samahan party.

Bong Go ‘does not control me,’ says Duterte