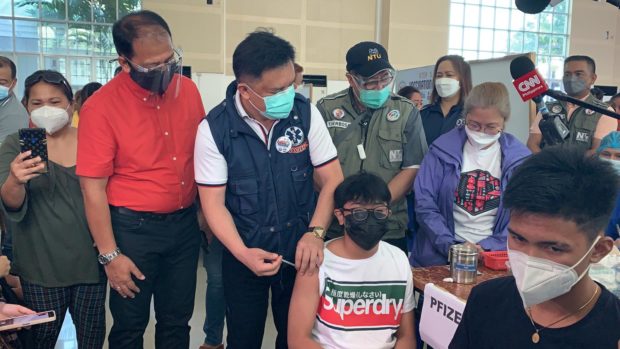 CITY OF MALOLOS — Central Luzon is targeting one million COVID-19 vaccinations during the country’s three-day national vaccination drive, with at least nearly 300,000 doses administered on the first day.

“Sa first day natin, 297,000 doses were given and I believe meron pa tayong late reporting na papasok,” Dr. Corazon Flores, Department of Health OIC-Director in Region 3, told reporters on the sidelines of the vaccination drive at the Bulacan Capitol Gymnasium in Malolos on Tuesday.

“We’re hoping to contribute more than a million for three days,” she added.

The government is mounting a national vaccination drive from Monday, Nov. 29, until Wednesday, Dec. 1.

So far, a total of over 2.4 million doses have been administered in the first day of the three-day vaccination drive nationwide.

According to Flores, many of the younger population flocked to vaccination sites in the region.

In order to keep the vaccination drive organized, Flores said marshals have been deployed to different sites.

The region has an overall target to vaccinate 8.7 million of its population, according to Flores.

As of Tuesday, 69.65 percent have received their first dose while nearly 50 percent have completed their vaccination in the region.