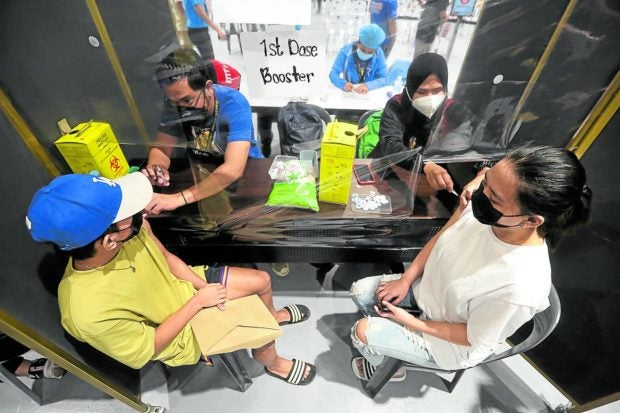 FIRST SHOT People who have yet to receive their COVID-19 vaccine get their first dose at a vaccination center set up at SM Megamall in Mandaluyong City during the first day of the “Bayanihan Bakunahan,” the three-day national vaccination drive. —NIñO JESUS ORBETA

MANILA, Philippines — As the figures from the first of the three-day national vaccination drive trickle in, government on Tuesday said that it generally had a “good turnout” after administering some 2.4 million COVID-19 vaccine doses so far.

Interior Secretary Eduardo Año said on Tuesday that he is satisfied with the results of vaccination drive, which aimed to inoculate first or second doses to individuals, as well as booster shots who have completed their doses, especially those in regions with low vaccination rates.

(First of all, we are satisfied with our performance yesterday because people flocked to vaccination sites. Although, we do not have an official tally yet because vaccinators are concentrating on administering doses.)

(The reporting comes after. So, more or less by 10 a.m. later, official data will be available.)

(But, according to our VORS, as of around 5 a.m., vaccine doses administered reached 2.4 million, this is not official yet. We’ll wait for other data. But, this is a good number already.)

Based on initial reports on Monday afternoon, figures that reached the Department of Health showed only a little over half a million doses administered. However, there were still many local government units that have yet to turn in their vaccination report at that time.

Some vaccination sites were also overwhelmed with a number of vaccinees, an observation shared by Año, who claimed that most people came in earlier hoping to avoid crowding but ended up congesting the vaccination areas.

This is one of the issues that needed to be addressed by LGUs, Año said.

Health Undersecretary Myrna Cabotaje on Monday said that there may be a need to expand vaccination sites and extend inoculation hours to accommodate more vaccinees.

In a bid to inoculate 54 million Filipinos by year end, the government is holding a three-day national vaccination program to immunize nine million individuals.