Department of Agriculture asked ‘to respect the historical struggle and hardships of the peasants occupying contested lands’
Philippine Daily Inquirer / 04:40 AM November 30, 2021 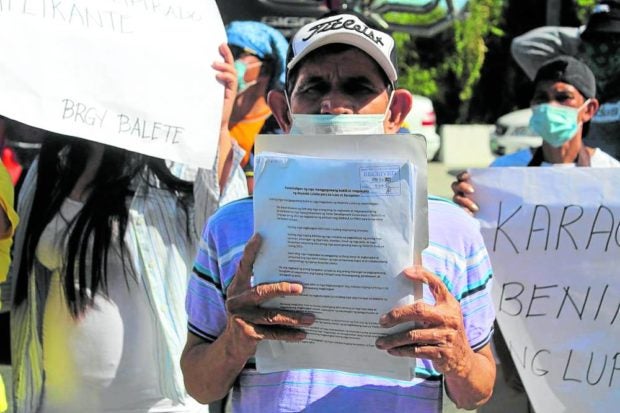 NEW PETITION Gabriel Sanchez, vice chair of Alyansa ng mga Manggagawang Bukid sa Hacienda Luisita, holds a copy of a second petition filed in the Department of Agriculture demanding that they get shares of land inside the vast sugar plantation in Tarlac province. —CONTRIBUTED PHOTO

TARLAC CITY, Tarlac, Philippines — At least 200 farm workers and residents of Hacienda Luisita on Monday staged a protest at the provincial office of the Department of Agrarian Reform (DAR) here to ask the inclusion of 538 tillers in the list of agrarian reform beneficiaries of a Cojuangco family-controlled company that used to own the vast sugar plantation.

The protesters, who belong to militant farmers’ group Alyansa ng mga Manggagawang Bukid sa Hacienda Luisita (Ambala), handed to the DAR officials a petition signed by 530 farmers demanding that they recognize the group’s Dec. 26, 2013, formal demand to get their share of lands from the 358-hectare property of Tarlac Development Corp. (Tadeco) inside the 6,453-ha Hacienda Luisita, which is owned by the family of the late former President Corazon Aquino.

In a statement, Gabriel Sanchez, vice chair of Ambala, said their group wanted the DAR “to respect the historical struggle and hardships of the peasants occupying the Tadeco contested lands.”

The lands that the tillers were seeking to own were not included in the 5,149 hectares put by Tadeco in the stocks distribution option (SDO) of the Comprehensive Agrarian Reform Program (Carp). The SDO was done via Hacienda Luisita Inc., which Tadeco and 6,296 farm workers formed in 1989 for the stock option scheme under Carp that then President Aquino began in 1988.

In 2012, the Supreme Court had ruled to place under Carp at least 4,195 ha of Hacienda Luisita, for which Tadeco was paid by the Land Bank of the Philippines a total of P471.5 million at 1989 value plus interest.

In August 2016, the DAR, under then Secretary Rafael Mariano, issued a notice of land reform coverage for another set of Hacienda Luisita landholding, totaling 358 ha and located in Balete and Cutcut villages, after denying the bid of Tadeco to contest the Carp coverage.

Sanchez said the claimants from Balete and Cutcut excluded from the Tadeco SDO were among the original tillers of the land, most of whom had been subjected to alleged illegal arrests by the police and the military, and had been sued by Tadeco for various alleged offenses.

The petition filed on Monday requested the DAR to ask the Armed Forces of the Philippines to pull out a military detachment in the two villages.

Ambala alleged that Tadeco has been selling large parcels of lands inside Hacienta Luisita that had not been included in the SDO.

They pointed out that the Supreme Court only approved the segregation of 500 ha, which was converted by Tadeco into an industrial estate, and 80.51 ha of land that the government bought for the construction of Subic-Clark Tarlac Expressway.

In a dialogue with the farmers on Nov. 16, DAR representatives said only 26 farmers from among the 2013 petitioners were included in the new list of agrarian reform beneficiaries since the size of the land was not enough to cover all other petitioners.

The DAR officials also said that not all of the petitioners were actual land tillers.

Read Next
In the provinces, thousands line up to get vaccinated vs COVID-19
EDITORS' PICK
Pharmally owes P6.3B in taxes, senators told
Rise to perfection: Spot on tiles for your stair risers
Guanzon for Marcos DQ, sees ‘delay, interference’
COVID-19 cases in NCR, nearby provinces now going down — OCTA
Step up your vlog game with vivo’s newest smartphone
NUSTAR Resort and Casino: Cebu’s next lifestyle and leisure gem
MOST READ
Leni mansplained? Abunda ‘interruptions’ stir own buzz
6 areas to be placed under Alert Level 3 from Jan. 28 to Feb. 15
Communication woes postpone Bongbong Marcos’ radio interview
Guanzon for Marcos DQ, sees ‘delay, interference’
Don't miss out on the latest news and information.