Pagasa says skies will be cloudy, rain likely on Tuesday 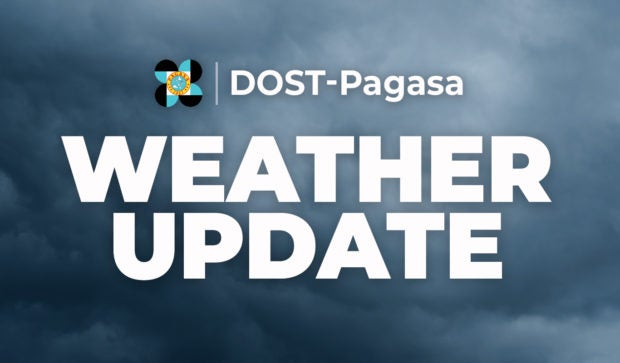 MANILA, Philippines — Overcast skies with rain, thunder, and lightning will prevail throughout the country on Tuesday, said the Philippine Atmospheric, Geophysical and Astronomical Services Administration (Pagasa).

According to Pagasa weather specialist Grace Castañeda, the shear line or tail-end of a frontal system will cause such cloudy conditions in Batanes and Cagayan. She also said that the same situation will occur in Northern Luzon but it will be due to the northeast monsoon or amihan.

(As for Metro Manila and the rest of the country, we expect the sky to be slightly cloudy as there will be chances of rain, thunder, and lightning.)

The same weather conditions will also prevail in the Visayas and Mindanao regions, the state weather service said.

On the other hand, Pagasa said the low-pressure area (LPA) it is monitoring outside the Philippine area of responsibility (PAR) was at 1,745 kilometers east of Visayas as of 3 p.m. Monday.

Castañeda said the LPA will be named “Odette” onced it escalates into a tropical depression and enters PAR.

Meanwhile, Pagasa said temperature ranges in key cities/areas on Tuesday will be the following:

Finally, Pagas said a gale warning is still raised over the northern seaboards of Luzion, specifically in Batanes, Babuyan, Cagayan, Isabela, Ilocos Norte and Ilocos Sur, due to the effects of the northeast monsoon.

Read Next
PNP: No more active COVID-19 cases among cops in Central Luzon
EDITORS' PICK
97% of COVID-19 beds at PGH currently occupied
Gear up and get ready to play with Yamaha Mio Gear
Acer starts the year off strong with the Aspire Vero National Geographic Edition
Japan brings back virus restrictions over Omicron surge
Over 3 Million worth of prizes to be won at Smart Padala’s SENDali Manalo Promo!
Uproar over no vax, no ride policy: Maybe it’s time for gov’t to say sorry—Bello
MOST READ
1Sambayan names 7 aspirants in its 2022 Senate lineup
Emma Stone calls Andrew Garfield a ‘jerk’ after he ‘lied’ about his ‘Spider-Man: No Way Home’ appearance
Guevarra to Acosta: Obey rules on unvaccinated
Commuters affected by ‘no vax, no ride’ policy may file class suit —Lacson
Don't miss out on the latest news and information.