MANILA, Philippines — The Commission on Elections (Comelec) will conduct mock polls on December 29 in Metro Manila and six provinces.

Aside from the National Capital Region, the mock elections will also be held in the provinces of Isabela, Albay, Negros Oriental, Leyte, Maguindanao and Davao del Sur.

This was according to a list presented by the Comelec Director Teopisto Elnas Jr. during a stakeholders’ forum organized by election watchdog National Citizens’ Movement for Free Elections (Namfrel) on Monday. 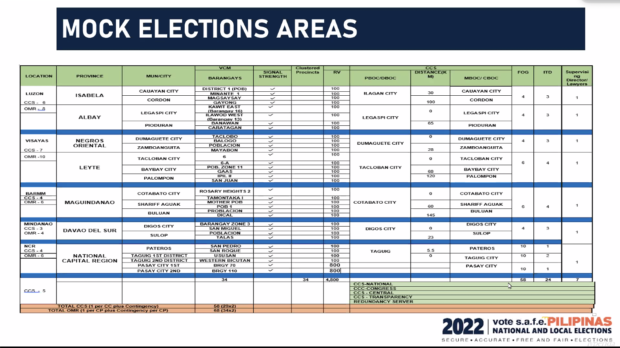 The mock elections will be an “end-to-end demonstration” of the entire election process, from the precinct level up to the transmission of votes to the National Board of Canvassers, Elnas said.

In a separate press conference, Comelec spokesperson James Jimenez said the poll body will meet with the Inter-Agency Task Force (IATF) for the Management of Emerging Infectious Diseases on Dec. 1 to discuss protocol preparations for the mock polls.

“We’re preparing the updates for that. Magmi-meeting na with IATF on the mock elections. That’s a necessary step towards ensuring that the elections are actually held,” Jimenez told reporters.

“On December 1, we’re going to have a meeting with the IATF to discuss the security preparations for the mock election,” he added.

According to the Comelec spokesperson, the mock polls will involve real voters and real Boards of Election inspectors.

“So there’s a lot of concern about safety and security,” he pointed out.

“We’re just starting to prepare for it. But it will be nationwide so we’ll have locations in Luzon, Visayas and Mindanao,” he added.