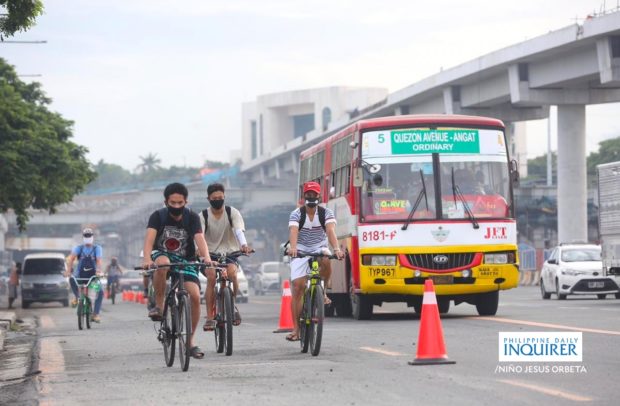 Bikers use a bicycle lane on Commonwealth Avenue in Quezon City that is protected only by orange cones. INQUIRER FILE PHOTO

MANILA, Philippines—Early in the pandemic, amid public transport restrictions which have affected many commuters, sellers and distributors of bicycles saw a surge in demand and sales as more Filipinos saw no choice but to pedal their way to their destinations.

However, almost two years since the coronavirus pandemic hit the country, numbers show that the increasing number of bicycles on the road has its own pitfall—rising cases of bicycle road crashes.

In this article, INQUIRER.net will try to answer two questions: How worse were bicycle-related accidents during the pandemic compared to pre-pandemic numbers? How can cyclists steer clear of road accidents?

In a statement, Anakalusugan Rep. Michael Defensor raised the issue of the “creeping surge in bicycle road accidents” which has injured many and killed some cyclists during the pandemic.

“The rate of increase in accidents this year is bound to be even higher, considering that more people are choosing to go to work in bicycles,” he added. 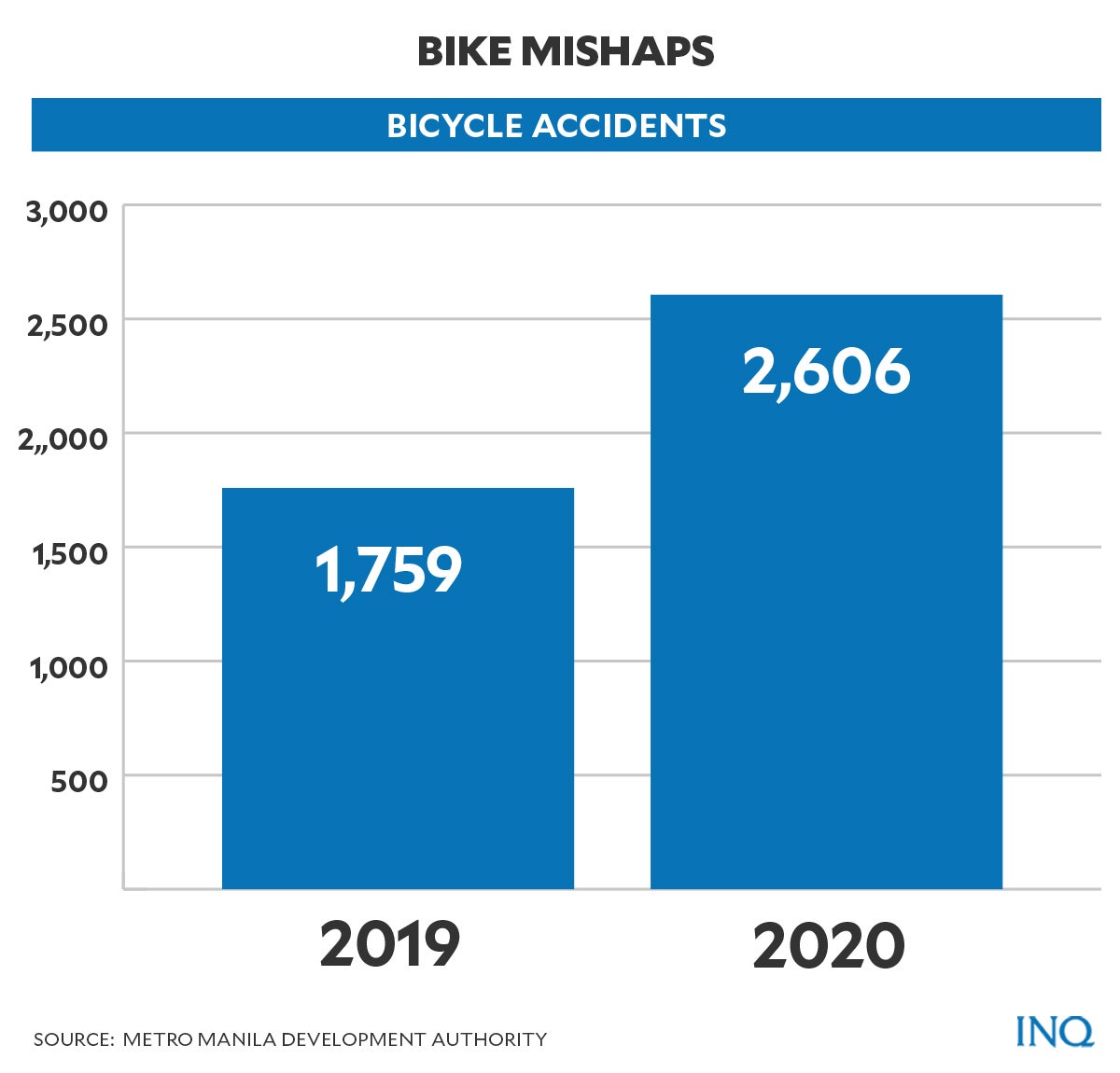 Citing data from the Metro Manila Development Authority (MMDA), he said the number of bicycle road accidents in the National Capital Region (NCR) alone rocketed to 2,606 cases in 2020 from the pre-pandemic 1,759 cases in 2019.

“But the MMDA statistics are understated, since they cover only crashes that get reported and documented. We suppose that the real figures are much higher,” the lawmaker said.

According to the Metro Manila Accident Reporting and Analysis System (MMARAS) Annual Report by the MMDA-Traffic Discipline Office-Traffic Engineering Center (MMDA-TDO-TEC), the number of bicycles involved in road accidents doubled from 2018 and 2019 to 2020.

In 2018, a total of 1,627 bicycles and pedicabs figured in road accidents in Metro Manila. MMDA said 24 of those were fatal, while 1,001 accidents caused non-fatal injuries.

The data also showed that bicycle and pedicab-related road accidents that year led to 602 cases of damage to property.

The following year, in 2019, 1,783 bicycles and pedicabs were involved in road accidents in Metro Manila. These resulted in 20 fatal cases, 1,060 “non-fatal injury” cases, and 703 cases of damage to property.

In 2020, MMDA noted that aside from bicycles and pedicabs, “e-bikes” or electronic bicycles, were added to the category.

Bicycles and the new normal

Amid the emerging bike culture among Filipinos, bicycles are now considered as an alternative mode of transportation in the new normal.

When stringent lockdowns were imposed in 2020 and led to the suspension of public transportation, bicycles began selling like hotcakes.

An article by The Straits Times stated that “three out of every four in Manila cannot afford a car or motorcycle” which could be an alternative amid the limited operations of bus and train services.

The options left for these people were to reach their destination by foot through walking or to pedal their bicycles. For many, the bicycle was a “more desirable” option, according to the article.

According to an estimate by MNL Moves, a cycling advocacy group, at least half a million people in Metro Manila now pedal to work.

Defensor attributed the rising number of bicycle road accidents to the “severe lack of safe mobility infrastructure” in the country.

“We have to restructure and redesign our streets to accommodate the influx of bicycles,” Defensor said.

The Department of Labor and Employment (DOLE), through research conducted as part of DOLE’s Bike-to-Work Project, found that majority of workers supported having more bike lanes on paved roads, bike paths, and more secure bike parking. 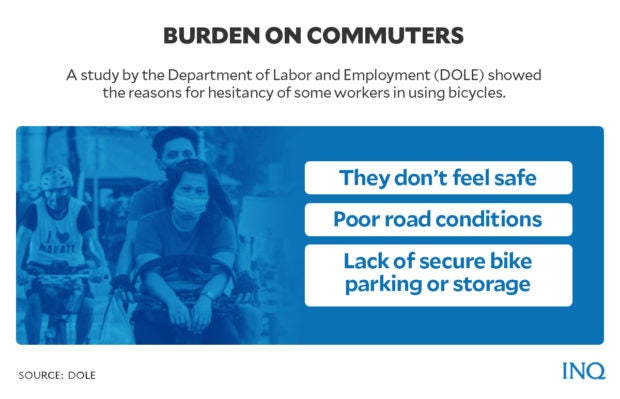 Most bike riders who took part in the study also expressed concern about the presence of bike lanes and their safety on the road.

“Respondents said that what prevents them from using the bike is because of the following reasons: 1) they do not feel safe traveling in the road; 2) poor road conditions; 3) lack of secure bike parking or storage facility and facilities (ex. shower or change rooms),” DOLE said in a statement released September last year.

An SWS survey released last January showed that 87 percent of Filipinos said they prefer bicycles and public transportation to be given priority over private motor vehicles on roads in cities or municipalities.

In November 2020, the Department of Transportation (DOTr) secured P1.3-billion to fund the installation of a bike lane network in Metro Manila, Cebu, and Davao as part of its pandemic recovery plan.

The budget was a portion of the P9.5 billion funding allotted by Congress to the DOTr under the Bayanihan to Recover As One Act.

READ: Pedaling into the new normal: Bicycles take a slow, but expanding road in PH 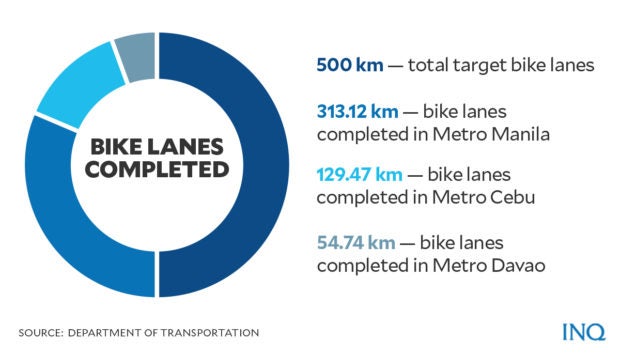 Pavement markings, including physical separators and road signages, have been put up in the bike lanes.

Last week, on Nov. 25, the transportation department announced that it has asked Google to include the country’s bike lane routes in the real-time navigation app Google Maps to help cyclists.

READ: DOTr asks Google to include bike lanes for its navigation map app

Aside from proposals to build bike lanes, several bills have also been passed in the Senate and the House of Representatives on ensuring a bike-friendly road amid the increasing number of cyclists in the country. 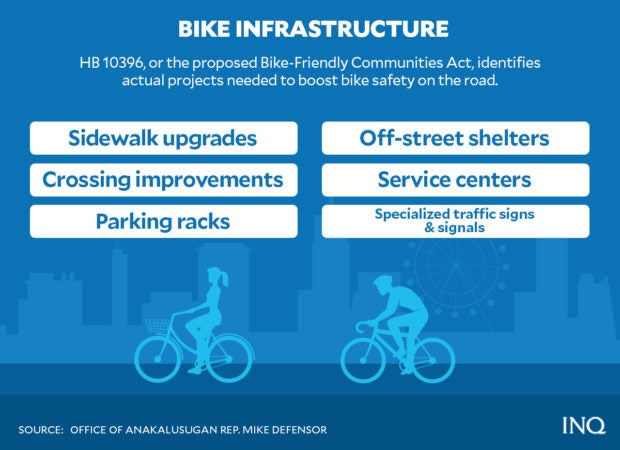 One of these was House Bill 10396, otherwise known as the proposed Bike-Friendly Communities Act, filed by Defensor which aims to build up the country’s cycling infrastructure.

“Under the bill, the Department of Transportation would be required to develop the country’s bicycle lane network, to include sidewalk upgrades, crossing improvements, parking racks, off-street shelters, service centers, as well as specialized traffic signs and signal,” a statement from the lawmaker’s office read.

The bill seeks to establish the proper infrastructure to make biking in the country’s roads safe for all.

“Post-quarantine scenario, we see biking as the primary mode of transportation of our people owing to the limited public transport aimed at ensuring social distancing,” said Speaker Lord Allan Velasco, who authored the bill.

In February, the Senate approved on third and final reading its own version of the bill seeking the establishment of “safe pathways” for those who prefer to walk, bike, or use other non-motorized vehicles to reach their destinations.

The bill mandates the DOTr and the Department of Public Works and Highways (DPWH), in coordination with local government units (LGUs), to identify and create a network of bicycle lanes connected to essential destinations like workplaces, medical facilities or groceries, schools, banks, and others.

Last May, the House committee on transportation approved a consolidated bill pushing for the establishment of a network of bicycle lanes and slow streets in the country. 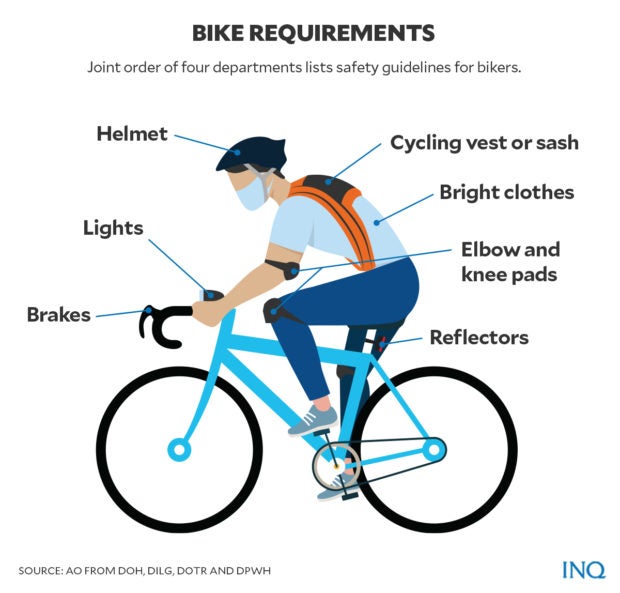 According to the Active Transport Guidelines, bikers should be equipped or geared with the following essential cycling items:

• Brake — According to the guideline, bicycles should be equipped with “well-maintained” front, rear, or front and rear brakes.
• Helmet — The helmet, according to the DOTr, “should be of correct size relative to the user” and can be fastened using a chin strap. The helmet must have a hard, smooth outer shell and be capable of absorbing impact.

Recently in Quezon City, Mayor Joy Belmonte — who participated in a biking event to commemorate the 18-day campaign to end violence against women and the third anniversary of the #RespetoNaman Movement — was fined P300 for not wearing a helmet.

According to the mayor, she gave her helmet to a fellow biker, who also participated in the said event and was not wearing protective gear. Controversial lawyer and senatorial aspirant Larry Gadon, however, said the case appeared to be staged.

• Lights — Bicycles should be equipped with at least one or two white front headlamps and one red tail lamp.
• Reflectors — Bicycles should be equipped with reflective devices to help with recognition and identification through illumination from motor vehicle headlights.
• Cycling vest or sash — The transportation department also said bikers should wear a light-colored, fluorescent or reflective vest or sash, which could help other road users see cyclists in daylight and poor light conditions.
• Elbow and/or knee pads — Protective pads for elbows and knees can help absorb or reduce the severity of impact during a road crash or minor accident.
• Biking clothes — The guidelines advised bikers to avoid clothes which could get tangled in the chain or wheel or may obscure lights and reflectors.

In April, in partnership with MMDA and SM Cares, the DOTr launched a “Biker’s Manual” which includes several tips on personal protection and information on road signs and protocols for bikers.