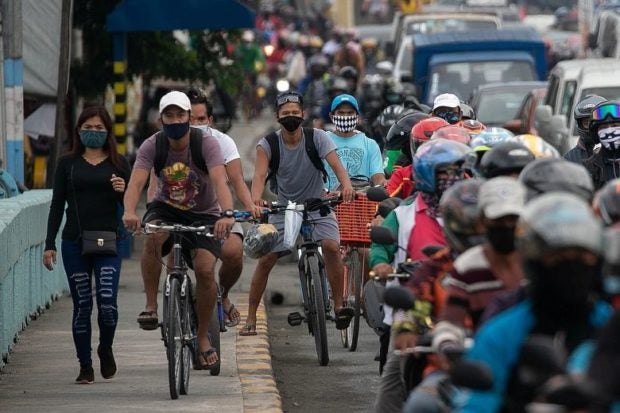 Cyclists taking to a sidewalk in Metro Manila last month as traffic built up at a checkpoint on the first day of the Philippine government’s reimplementation of a stricter lockdown to curb the coronavirus outbreak. REUTERS via The Straits Times/Asia News Network

MANILA, Philippines — Mr David Llorito, 56, a communications officer at the World Bank, used to cover about 100km a day on his touring bicycle.

In one of his bike-packing adventures last year, he managed to pedal his way for about 300km across Panay island in the central Philippines before a typhoon caught up with him.

Then came the coronavirus pandemic.

These days, he is down to biking just 15km a day.

“I use it for supply runs. I use it to go to open markets. I’m still wary of going to the malls because of news that the virus is in the air,” he said.

But while his wings have been clipped, he is glad that he is now seeing more fellow cyclists on the road.

With public transport still scarce because of shelter-at-home restrictions to slow the spread of Covid-19, hundreds of thousands of Filipinos are turning to bicycles to take them where they need to go.

Bicycles are selling like hot cakes, with racks at even high-end bike shops empty.

A small shop in Manila’s La Loma district has had to replenish its stock every week because bicycles were being snapped up as soon as they arrived.

“We’re selling seven to 10 bicycles a week, far more than what we used to,” said Ms Princess Dianne Barino, 21, a clerk at the shop.

It is not just bicycles that are in hot demand.

Mr Llorito said he once went to four bike shops looking for a brake set and a seat post.

“You could easily get these parts before the pandemic. Now, you have to put your name on a list and wait,” he said.

Three out of every four people in Manila cannot afford a car or motorcycle. And with very limited bus and train services, the only option for many to get to work or a grocery store is either by walking or pedaling.

Not surprisingly, the bicycle is the more desirable of the two.

A study by the e-commerce aggregator iPrice Group has found that Filipinos were three times more likely to search online for bicycles to buy in June as they did in April.

Even electric bikes and scooters are being snapped up. Google searches for e-bikes and e-scooters grew by up to 189 per cent, according to iPrice.

Mr Llorito is hoping this newfound enthusiasm among Filipinos for the bicycle will not wane after the Covid-19 outbreak is over.

He said the pandemic had spurred the government into building infrastructure to support cycling as a way of life.

Traffic officials are creating bike lanes along roads and highways, and malls are finally allocating parking space for bicycles.

He also believes that those who have gone into biking as part of their daily routine will eventually make it a way of life, even when it is already deemed safe to once again ride a train or a bus.