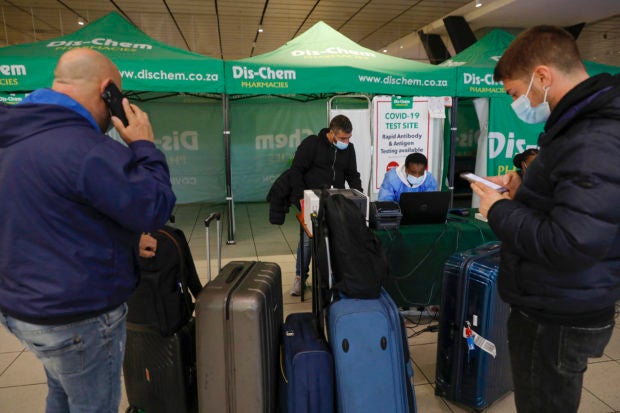 A healthcare worker assists a traveller to obtain his test results after conducting a polymerase chain reaction (PCR) Covid-19 test at OR Tambo International Airport in Johannesburg on November 27, 2021, after several countries banned flights from South Africa following the discovery of a new Covid-19 variant Omicron. AFP

JOHANNESBURG — South Africa, whose citizens have  suddenly become persona-non-grata around the world after the discovery of a new Covid variant in the country, says it is being “punished” and unfairly treated for sounding the alarm.

The government in the country worst-hit by the pandemic on the continent, is seething over the stigma it has suffered in the past 48 hours for being the bearer of bad news.

The decision by many countries around the world to ban flights from southern Africa following the discovery of the variant, named Omicron, “is akin to punishing South Africa for its advanced genomic sequencing and the ability to detect new variants quicker,” the foreign affairs ministry said in a statement.

READ: What is known so far about new COVID-19 variant Omicron

“Excellent science should be applauded and not punished,” it added.

“New variants have been detected in other countries. Each of those cases have had no recent links with Southern Africa,” yet the global “reaction to those countries is starkly different to cases in southern Africa.”

The World Health Organization has cautioned against imposing travel restrictions due to Omicron.

South Africa’s healh ministry slammed the travel restrictions as “draconian”, “panic” and “misdirected” measures which go “against the norms and advice by the WHO”.

“We feel some of the leadership of countries are finding scapegoats to deal with what is a worldwide problem,” said Health Minister Joe Phaahla.

Pretoria fears the border closures will hurt “families, the travel and tourism sector, businesses” and that it may deter other countries from reporting discoveries of future variants for fear of being ostracised and punished.

“Sometimes one gets punished for being transparent, and doing things very quick,” Tulio de Oliveira, a leading virologist who announced the discovery of the Omicron variant, said.

“They don’t even care about what South African scientists really think at the moment… they are just in a flatspin, in a complete panic about this new variant,” said South African Nica Kruger, 26, scrambling to get a seat on a flight to Dubai on Saturday

German university student Ayla Roemer, 28, who arrived in South Africa for a hiking holiday 24 hours earlier, but was flying back Sunday, was surprised at the speed with which the Berlin government acted, banning flights from southern Africa.

The South African foreign ministry on Saturday boasted of the country’s capacity to test for Covid and its vaccination programme backed up by a “world-class scientific community”.

These factors “should give our global partners the comfort that we are doing as well as they are in managing the pandemic” it added.

With around 23.8 percent of the population being fully vaccinated compared to 54 percent of the world’s population, the inoculation rate is low, but much higher than in the rest of Africa which is sitting at an average of just under seen percent.