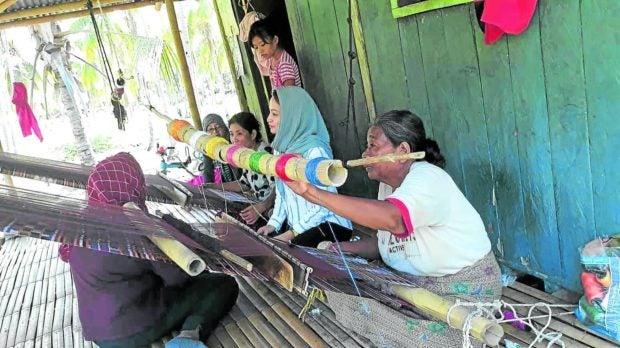 PERSONAL STORIES: Through the effort of nongovernment group Sinagtala, some 104 Sulu women are introduced into weaving not just to earn but more importantly to have a platform to share personal stories so they can heal from previous experiences of violence and conflict. —PHOTO COURTESY OF SINAGTALA

LUUK, Sulu, Philippines — Kalma Jawkala, 73, unrolls the colorful balls of thread, carefully straightening each strand looped to a series of vertical string in the loom. She picks another color, interlacing it with the vertical thread, and combing it down with a harness to create one beautiful tapestry.

For some, being attached to “hablunan” (Tausug for handloom) is tedious work. One has to work on the warp and weft meticulously. The work is so tiring and, oftentimes, painful to the shoulder, waist and legs due to the long hours of sitting.

After hours of working behind the loom, a wonderful tapestry emerges, either a piece of Pis Yabit (Tausug headscarf, measuring 1 meter by 1 m), a table runner, or, maybe even a wall hanger.

Each design has its own story, depending on the weaver’s experiences and narratives.Life experience

For Jawkala, a grandmother now, the process of weaving is giving her life, allowing her to piece one pain after another, giving her time to think. She lost her husband, a combatant of the Moro National Liberation Front (MNLF), 30 years ago.

As she recounts her ordeal, she tears through her memories. One finished Pis Yabit means a part of her starts to heal.

“When my husband died, I didn’t know where to go, who to ask help,” she told the Inquirer.

“Everyone in our community was so poor like me. I had to struggle for a living and I thought I am more than 70 years old now, I would die not learning anything new. Until a group came over to teach us how to weave,” she added.

For 17-year-old Jul Arsalyn Habud, weaving is a form of healing. It also helps her overcome her fears.

“I never thought I could have a decent and peaceful life. I surrendered even if I was not an Abu Sayyaf,” she said. Her fellow weavers taught her to be strong and to tell her story, she said.

“We just don’t weave here. We share our stories while we weave and it is empowering,” Habud said. 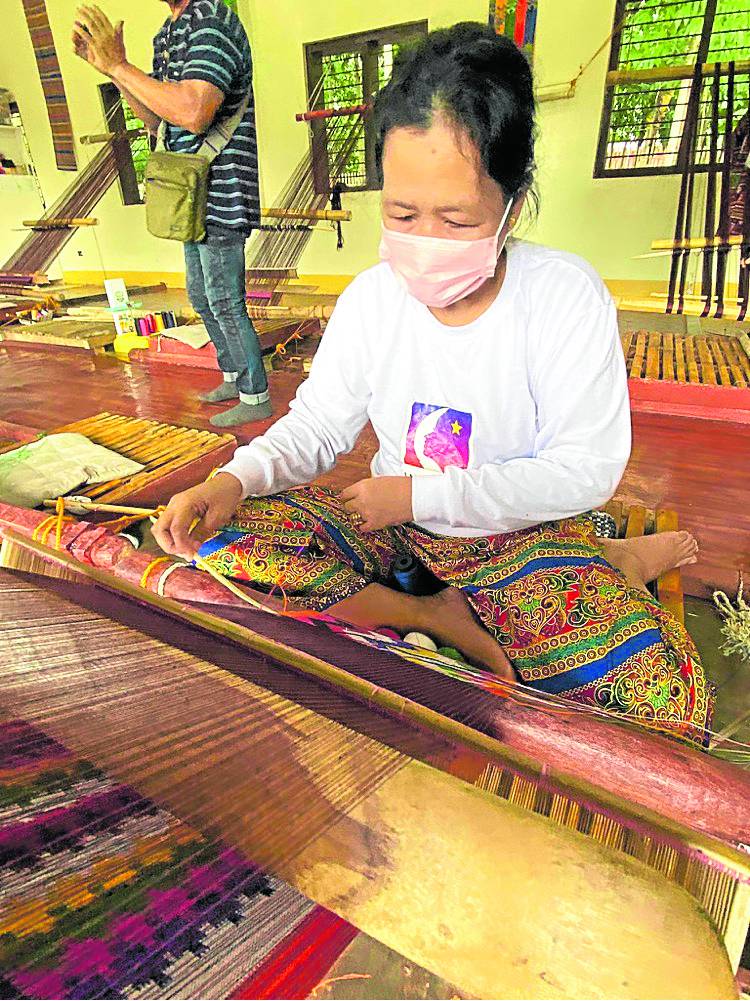 SPARKING HOPE Aside from creating a colorful tapestry out of the balls of thread they work on, women weavers of Sulu
generate hope for a new life. —PHOTO COURTESY OF SINAGTALA

But for 13-year-old Anadin Samuddin, weaving is an escape from poverty.

The high school student recounted how her family broke up because of a feud between her mother’s and father’s side of the family. Her hopes vanished when her parents’ kin started shooting at each other.

“My siblings and I were torn apart and stayed with different families,” Samuddin said.

Since there was hardly any opportunity for girls like her, she decided to work so she could go to school.

“Weaving is not just an experience to meet different women of different ages. I also learn from their stories, they offer me their shoulders to cry on, they show me a way to earn a living and a chance to pursue college education,” Samuddin said. 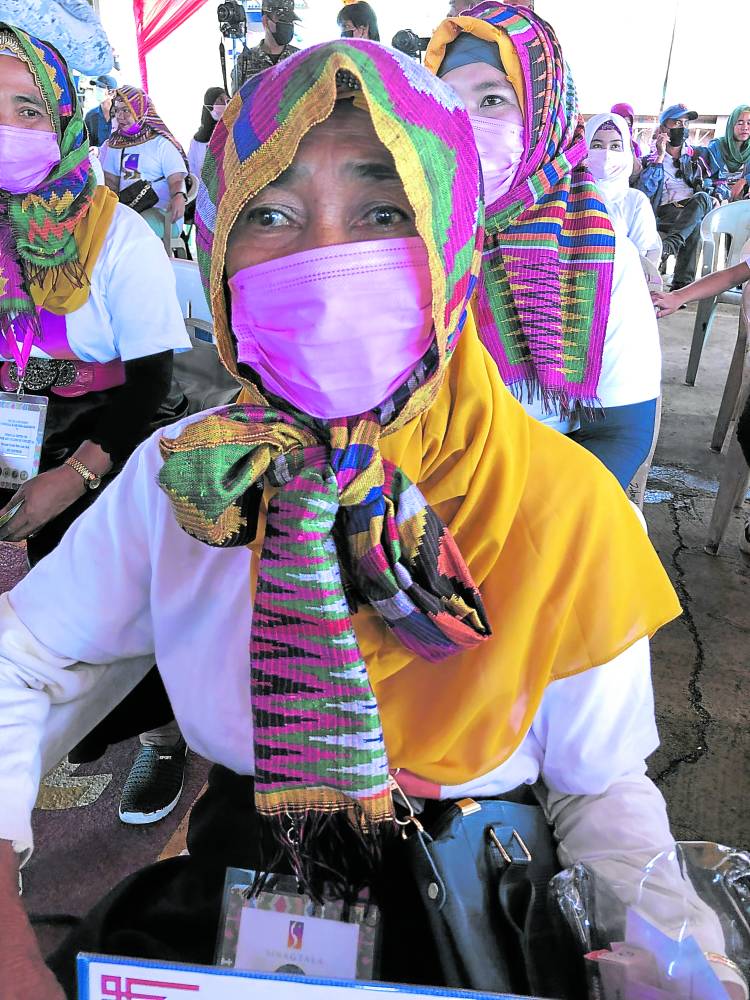 EASING BURDEN For Kalma Jawkala, each woven headscarf she finishes lightens the emotional burden that she
carries since losing her husband, a Moro rebel, 30 years ago. —JULIE S. ALIPALA

Jawkala, Habud and Samuddin are among the 104 women from different Sulu towns who finished the 120-hour weaving training from Sinagtala, a nonprofit organization that trains displaced mothers, women, and orphans living in conflict areas like Sulu.

Every woman who joined the training received a starter kit handloom and some P8,000 worth of threads of assorted colors.

“All our women are either widows [or] orphans of war,” Pulalon said. “Some of them wives of MNLF combatants while others are orphans and widows of slain Abu Sayyaf members.”

Jamela Alindogan, Sinagtala executive director, said Sulu women had been in her mind for a long time after she started the toys and books library project for women and children in Basilan and another weaving community in Marawi City.

A journalist by profession, Alindogan had witnessed countless wars, where the most affected were always women and children. Their abject conditions led to an awakening.

“When I became a mother, I realized the powers and limits of being a journalist,” she said.

“Our priority are the marginalized women in conflict-affected areas, women who have been deprived of opportunities to overcome the crisis in their own towns, those who could hardly feed her family, the unschooled and young widows forced to marry to survive,” Alindogan said.

She said Sinagtala would serve as the voice for these women. 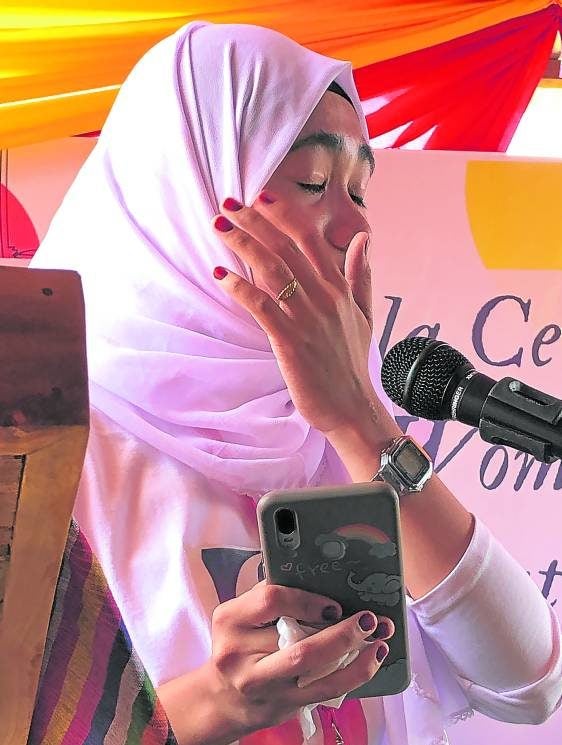 OVERCOMING FEAR By working the looms together with other women, Jul Arsalyn
Habud, 17, is able to overcome her fears and open up her ordeal of beingmade to surrender
as an Abu Sayyaf fighter even if she is not. —JULIE S. ALIPALA

Sam Chittick, the country representative of The Asia Foundation, said he was touched by Habud’s courage to overcome her trials and how she found refuge among her fellow weavers.

“This is a kind of social support, a community support among women,” Chittick said.

He described the tapestries as “beautiful, a combination of [what is] so important in a life, its culture, its history,” he said. “It is art, it is passion and most especially, this is an opportunity for [them to earn an] income.”

“The key here is the participation of barangay officials. It was not easy to bring and encourage the women to participate,” Songano said.

“Some were apprehensive at first,” he added. “We know the stories of each of these women and we are happy that they started to put trust in this economic activity.”

“This is what we call peace,” said Rear Adm. Toribio Adaci Jr., commander of the Naval Forces Western Mindanao. 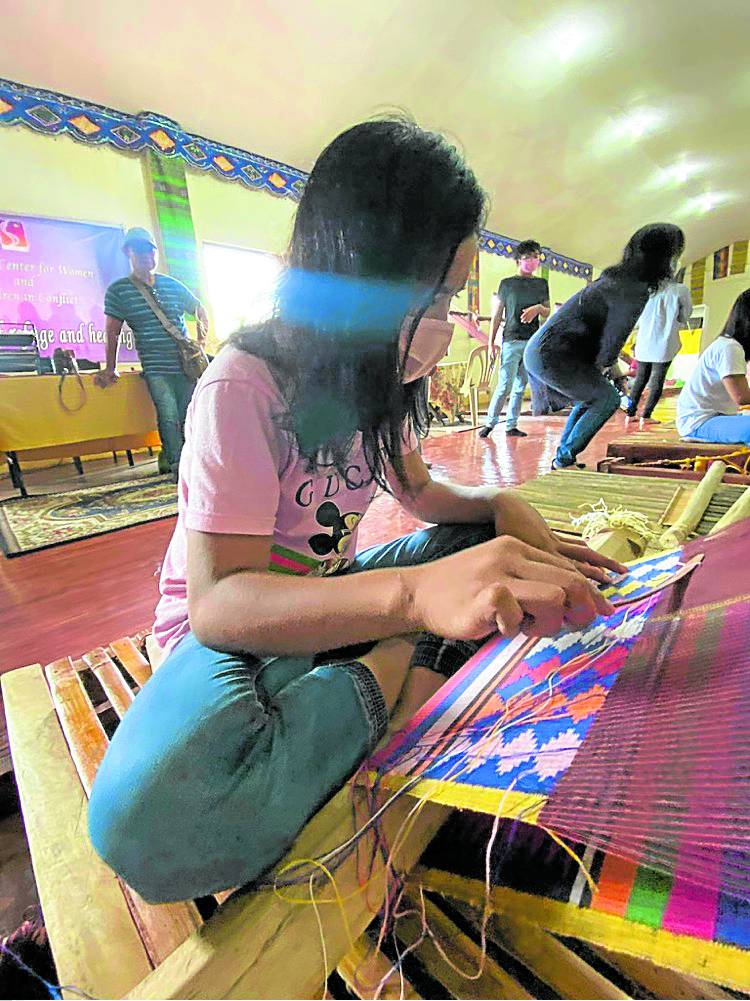 COMMUNITY SUPPORT Widows and orphans of Moro rebels and Abu Sayyaf fighters have managed to rise from poverty through their community’s support. —PHOTO COURTESY OF SINAGTALA