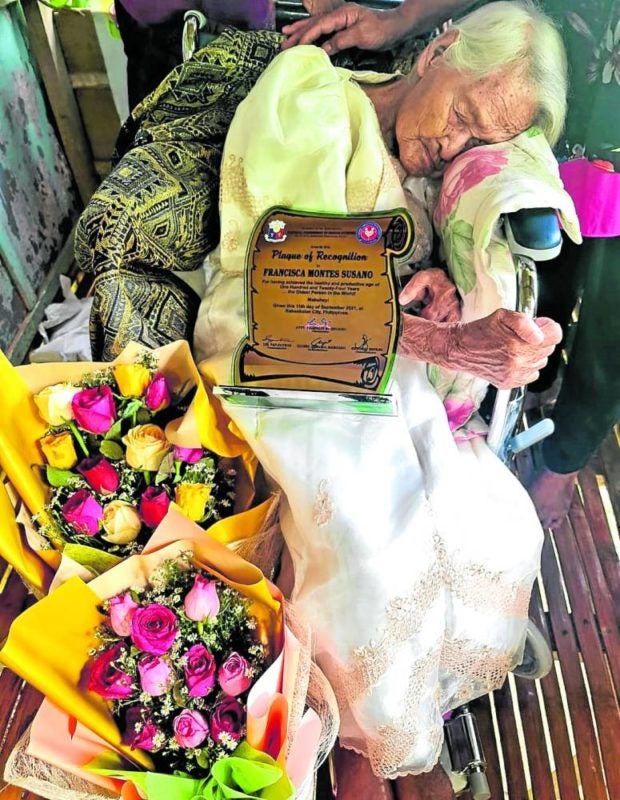 CELEBRATING LIFE: Francisca Susano receives flowers, a plaque of recognition and other gifts during her 124th birthday on Sept. 11 in Kabankalan City. —CONTRIBUTED PHOTO

Susano, a farmer during her prime and fondly called Lola Iska, had not been recognized by any international record-keeping body but she was older than the world record holder, Kane Tanaka of Japan, who is 118 years old.

Her granddaughter, Merlene, said Susano took two deep breaths and died after the family’s evening prayer at 6:45 p.m. in her home in Barangay Camingawan, Kabankalan City, about 102 kilometers from the Negros Occidental capital of Bacolod.

Merlene said their grandmother had complained of difficulty in breathing at 3 p.m. Monday. Her condition improved after her grandchildren massaged Susano with liniment oil.

The local health office of Kabankalan had yet to determine the cause of Susano’s death.

Her death was announced by the Kabankalan City government on its Facebook page on Monday night. The local government said Susano had been recognized as the oldest person in Negros Occidental and the Philippines.

Kabankalan officials led by Mayor Pedro Zayco and Vice Mayor Raul Rivera, in a statement, said: “Lola Iska will always remain as our inspiration and pride.”

Susano had 14 children, eight of whom are still living. She is also survived by more than 500 grandchildren, Merlene said.

Susano was born on Sept. 11, 1897, when the Philippines was still a colony of Spain.

She was supposed to be considered for official recognition in the Guinness World Records as the oldest person in the world but her family failed to complete the requirements.

During her birthday on Sept. 11 when she turned 124, Commissioner Franklin Quijano of the National Commission of Senior Citizens (NCSC) visited Susano and handed her a bouquet of flowers, a plaque of recognition, P10,000 in cash and a manager’s check worth P24,000.

The NCSC plaque recognized that Susano was also the oldest person in the world. Aside from the plaque, she was also given a certificate of recognition for achieving a “healthy and productive age of 124.”