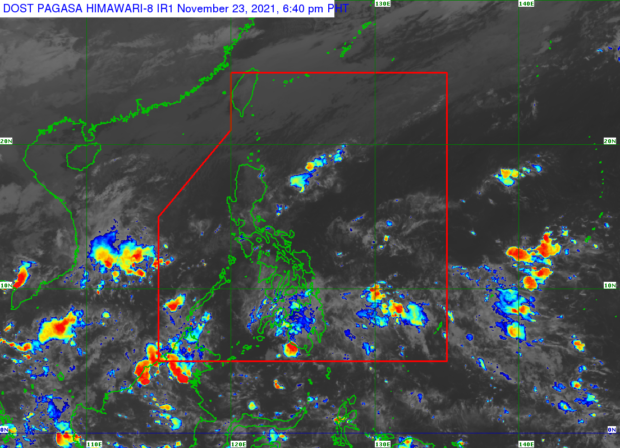 MANILA, Philippines — Cloudy skies with rain will prevail over north and Central Luzon as well as the Bicol region and Eastern Visayas on Wednesday, said the Philippine Atmospheric, Geophysical and Astronomical Services Administration (Pagasa).

Pagasa weather specialist Meno Mendoza said the prevailing northeast monsoon, locally known as the “amihan,” will cause the rainy weather in north and Central Luzon.

Meanwhile, the shear line will likewise cause the same weather conditions in the Bicol Region and Eastern Visayas.

(In the rest of Luzon, the weather will be clearer, including Metro Manila but short-term rains due to localized thunderstorms are still possible.)

The rest of the Visayas and the entire Mindanao will also experience generally fair weather, but localized thunderstorms should still be expected, especially in the afternoon and evening.

Below are the temperature range in key cities/areas according to Pagasa for Wednesday:

Meanwhile gale warning remains raised in the seaboards of Northern Luson specifically in the Batanes, Cagayan, Northern Caast of Ilocos Norte, Ilocos SUr, La Union, Pangasinan, and the Western Coast of Ilocos Northe, due to the presence of “amihan,”

(The waves are big in the mentioned areas, so fishermen are advised not to sail in the said seas.)

Read Next
Woman nabbed in Bulacan after ordering P170K worth of imported party drugs
EDITORS' PICK
Smart offers wireless fiber-like speeds to Filipino homes with country’s first 5G Prepaid Home WiFi
Pharmally’s Twinkle Dargani in tears when asked about missing documents
Corruption in PH: Where presidential aspirants stand
Two more sites at Robinsons Malls for temporary offsite passport services
BIR audits tax compliance of Pharmally
Holidays made best with Acer’s ‘Holidays at Home’ raffle promo
MOST READ
Roque ‘hurt’ after presidential aspirant did not adopt him in Senate lineup
Gordon: ‘How dare you ask for Filipinos’ vote when you failed them?’
Pharmally’s Twinkle Dargani in tears when asked about missing documents
WHO chief scientist say Omicron is very transmissible
Don't miss out on the latest news and information.