Judiciary, one wrong committed in the past | Inquirer News
Close
menu
search

Judiciary, one wrong committed in the past 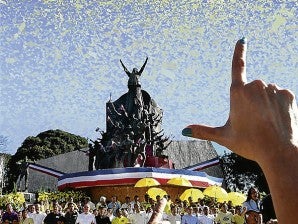 Twenty-six years after millions flocked to Edsa to overthrow a dictator, President Benigno Aquino III on Saturday rallied Filipinos to take action against the judiciary that, he said, like martial law was one of the “wrongs committed in the past” that needed to be corrected.

Apparently continuing on a recent favorite theme, the condemnation of impeached Chief Justice Renato Corona, Mr. Aquino urged “immediate action,” saying martial law happened because people decades ago chose to keep silent until they could no longer bear the sufferings it brought the country.

“Now, after 26 years, it is clear that our fight is not yet finished,” Mr. Aquino said in a speech during the Edsa anniversary ceremonies at the People Power Monument.

“As we link our arms in the straight path, I trust that we can reach a society that is free from a judiciary with two faces—one with a partial justice system and another with balanced scales,” he said.

As in previous speeches attacking Corona, the President urged the people to participate and act as the Chief Justice’s trial at the Senate impeachment court enters its seventh week.

“If you want to remain in the old system, go ahead and pretend to be deaf. Pretend to be blind. Don’t speak. Don’t participate,” he said.

“But if you believe that there’s something wrong in the system and that this has to be corrected, let’s go and push back (Tara, pumalag tayo). Let’s participate. Let’s make it right,” he added.

The President made these remarks in the presence of three senator-judges who were sitting onstage with him—Senate President Juan Ponce Enrile, Senate Majority Leader Vicente Sotto III and Sen. Gregorio Honasan.

Enrile made one of his rare appearances at an Edsa anniversary celebration.

Enrile and Honasan were among the military and defense leaders who went against the dictator Ferdinand Marcos in the first Edsa People Power Revolution in February 1986. Enrile was the then defense minister and Honasan was his chief security aide and leader of the Reform the Armed Forces Movement, or RAM.

“Our country is now facing a crossroad. In one direction is the weedy path, where the influential holds the scales of justice and those who manipulate the law benefit,” Mr. Aquino said.

“In the other is the straight path where the rules are clear, justice favors no one and those who are at fault are made answerable. Let’s remember: Martial law happened because Filipinos kept silent for too long,” he said.

“As was said way before, ‘Kung hindi ka kikilos, sino pa? Kung hindi ngayon, kailan pa?’ Let us now move before it’s too late. Let us now move so that we can quickly leave behind the darkness in the past,” he said.

In another speech earlier Saturday, following wreath-laying rites at the monuments in Manila of his parents—the late former President Corazon Aquino and martyred opposition leader Benigno Aquino Jr.—and the late Jaime Cardinal Sin, the President pressed on with his anti-Corona theme.

Filipinos have an opportunity to effect change, they should not waste it, he said.

He said working for reforms is the duty of every Filipino, “not just of Ninoy and Cory Aquino.”

In his speech, the President also said investor confidence in the Philippines was at a record high during his 19-month administration, as shown by P439 billion worth of investments that have poured into the Philippine Economic Zone Authority (Peza).

The amount already represents 22 percent of the P2.003 trillion worth of investments that went into the Peza since 1995, he said.

Mr. Aquino made the remarks amid criticism that the economy slowed down during his administration because of his alleged preoccupation with politics and going after perceived political foes, including former President Gloria Macapagal-Arroyo and Chief Justice Corona.

“After one and a half years of the straight path, let us ask ourselves: Is there a difference between our system now and the system that we came upon before when for almost a decade Filipinos were affected by graft and corruption?” Mr. Aquino said.

“The correct answer: It’s a huge difference,” he said.

The President said the international financial community has placed much confidence in the country because of the reforms his administration has been carrying out.

“We are not one to brag but when the country has registered all-time highs in the stock index 16 times and when Moody’s, Standard and Poor’s and Fitch credit-rating raised our grade several times, this is no longer called bragging,” he said.

“This is called reforms and results,” he said.

Mr.  Aquino said the Japan External Trade Organization has also declared that the Philippines is an ideal destination for businessmen in Asia in both manufacturing and services sectors.

He said the organization cited the country’s skilled workers and the affordability of doing business in the country.

“This kind of success isn’t achieved by chance,” he added.

He said his government has “dismantled the barricades of poverty using our conditional cash transfer program.”

He said the target of getting 2.3 million families into the program in 2011 has been exceeded by 45,000 before the year ended.

Bayan said the nation may have another Aquino at the helm, but this is not necessarily a sign of better things to come. Human rights violations continue, victims of the Marcos dictatorship have yet to receive true and complete justice, human rights violations victims during the Arroyo administration have yet to receive their due as well, it said. Hunger, poverty, unemployment and US intervention continue, Bayan said.

“And these dreams and aspirations will not likely be fulfilled even under the second Aquino regime. We definitely have no illusions in that regard,” he further said.

But for Manila Archbishop Luis Antonio Tagle, it will not do for people to just sit and criticize.

“Let everyone be involved. Don’t wait to be critics alone,” the young archbishop told the hundreds of devotees who continued to pour in even after his homily had started at the noontime Mass on Saturday at the Edsa Shrine.

Tagle told reporters his message was not addressed to any person in particular.

Change, after all, cannot be achieved by one person alone, or only by the people who hold positions of power, he said.

“Do not leave the responsibility up to the (people in government),” he said.

This was what God did in the first place, Tagle said. The Supreme Being chose several people, and not only one man, to be the “light of this world,” he said.

In Bacolod City, at least 200 people joined two separate rallies that demanded the ouster of Corona and the transfer of Arroyo to a regular jail facility from Veterans Memorial Medical Center. The rallies at the Fountain of Justice were organized by Bayan and the yellow-clad members of the Negrenses for Corona Removal (N4CR).

Bayan denounced the President for allegedly using the Corona impeachment and Arroyo trial to hide his inutile position on the series of oil price increases.

“Aquino has long betrayed the spirit of the Edsa by not standing with the people’s demand for genuine land reform, nationalist industrialization and upholding national patrimony over foreign interests,” said Bayan Negros secretary-general Christian Tuayon. With reports from Kristine Felisse Mangunay, Leila B. Salaverria and Carla P. Gomez, Inquirer Visayas