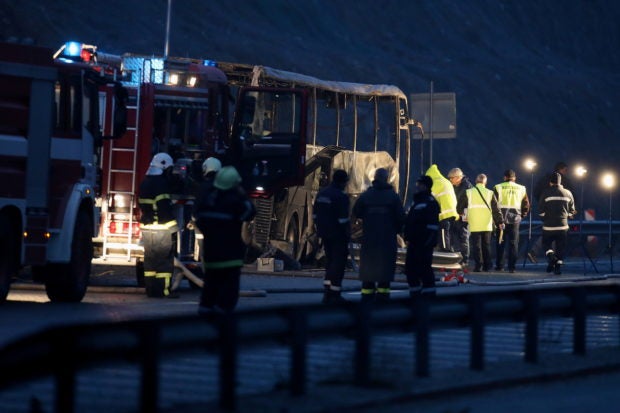 A view shows the site where at least 45 people were killed when a bus with North Macedonian plates caught fire on a highway, near the village of Bosnek, in Bulgaria, November 23, 2021. REUTERS/Stoyan Nenov

SOFIA — At least 45 people, most of them tourists from North Macedonia, died as a bus crashed in flames on a highway in western Bulgaria on Tuesday, officials said.

“At least 45 people were killed after a bus caught fire and crashed, or crashed and then caught fire,” Nikolov said. His ministry later updated the toll to 46. There had been 53 people on board.

The accident happened on Struma highway about 45 km (28 miles) west of Sofia around 2:00 a.m. (0000 GMT). The site had been sealed off and Bulgarian interim Prime Minister Stefan Yanev rushed to the scene of the tragedy.

An official from Sofia emergency hospital said the seven people receiving treatment has jumped out of the burning bus. All were in stable conditions.