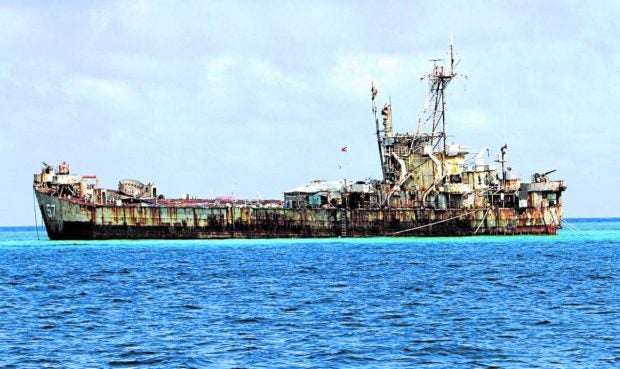 MANILA, Philippines — President Rodrigo Duterte on Monday told a regional summit hosted by Chinese leader Xi Jinping that the Philippines “abhors” a recent altercation with Chinese ships in the West Philippine Sea and said the rule of law was the only way out of problems.

“We abhor the recent event in the Ayungin Shoal… This does not speak well of the relations between our nations and our partnership,” the President said at the Asean (Association of Southeast Asian Nations)-China special summit commemorating the 30th anniversary of their dialogue relations. It was co-hosted by Xi and Brunei Sultan Hassanal Bolkiah, the current Asean chair.

Duterte said the South China Sea issue was “a strategic challenge that cannot be solved by force” and called on stakeholders to “exercise utmost self-restraint, avoid the escalation of tensions and work toward the peaceful resolution of disputes in accordance with international law.”

The president said the United Nations Convention on the Law of the Sea (Unclos), as well as the 2016 arbitral award on the South China Sea, should be used as the legal tools to resolve the conflicting and overlapping maritime claims in the region.

These “provide [the] legal clarity … pointing us to a just and fair solution to our disputes. We must fully utilize these legal tools to ensure that the South China Sea remains a sea of peace, stability and prosperity,” Duterte said.

The arbitral award stated, among other things, that the Philippine-occupied Ayungin Shoal was within the country’s 370-kilometer exclusive economic zone. China has rejected the award.

The President also called on Beijing to remain committed to the conclusion of an effective and substantive Code of Conduct in the South China Sea.

“There is simply no other way out of this colossal problem but the rule of law,” he said.

Chinese President Xi Jinping told Asean leaders at the summit that Beijing would not “bully” its smaller regional neighbors.

Xi said China would never seek hegemony nor take advantage of its size to coerce smaller countries, and would work with Asean to eliminate “interference.”

“China was, is and will always be a good neighbor, good friend and good partner of Asean,” Chinese state media quoted Xi as saying.

The aborted supply mission to Ayungin Shoal resumed on Monday with no security escort on the request of China, according to Defense Secretary Delfin Lorenzana.

The same two wooden-hulled boats blocked and turned back by Chinese vessels left Oyster Bay in Palawan on Monday morning and are expected to arrive at Ayungin Shoal on Tuesday morning, Lorenzana said in a message to reporters on Monday.

“China’s aggressiveness in the West Philippine Sea and inside our own territory is largely a product of the so-called ‘soft landing’ and ‘pivot to China’ foreign policies of the Duterte administration since 2016,” he said.

He proposed three concrete measures to accompany the president’s policy statement: the deployment of more troops to Kalayaan Islands, more Philippine Coast Guard ships to disputed areas, and the rehabilitation of the Pag-asa Island airstrip at the soonest possible time.

The European Union (EU), New Zealand and the United Kingdom have also added their voices to those condemning China over the Ayungin incident.

New Zealand Ambassador Peter Kell, in a post on Twitter, said respect for international law, especially the Unclos, and compliance with the 2016 arbitral ruling were vital for a peaceful and secure Indo-Pacific.

“Pleased to reaffirm the importance the UK attaches to Unclos and a stable, prosperous South China Sea. I am concerned by recent incidents that have raised tensions and urge against actions that hinder the peaceful settlement of disputes,” she said on Twitter.

The EU, on the other hand, said the incident “follows other unilateral actions by vessels of the People’s Republic of China in the South China Sea over the past months.”

“The European Union reiterates its strong opposition to any unilateral actions that endanger peace, security and stability in the region,” EU spokesperson for Foreign Affairs and Security Policy Nabila Massrali said in a statement.

In an interview aired Monday at radio station dzBB, Esperon said the MDT could be triggered only with the approval of the US Congress.

Esperon, however, said that the Philippines could not also act recklessly in terms of asserting its sovereign rights on the West Philippine Sea.

“Let’s remember that our relations with China do not start and end with the South China Sea or West Philippine Sea. We have cultural ties, economic, defense, tourism,” Esperon pointed out.

Duterte also said in his speech that China deserved its status as the Asean’s comprehensive strategic partner, underlining the depth and breadth of its 30-year partnership with the regional bloc.

He pointed to China’s timely provision to the Asean of much-needed COVID-19 vaccines and medical supplies to address the pandemic as nations scramble to contain it.

China, he added, was also the first Asean Dialogue Partner to engage the regional grouping in addressing the pandemic.

Among those who joined the president during the special summit were Foreign Affairs Secretary Teodoro Locsin Jr. and Trade Secretary Ramon Lopez.

—WITH REPORTS FROM JEANNETTE I. ANDRADE AND REUTERS