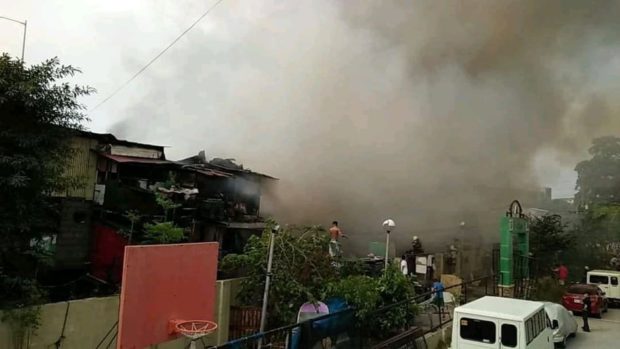 According to the BFP, the first alarm was raised at 1:12 p.m.

It was declared under control by chief inspector Jessie James Samaniego by 2:02 p.m.

Firefighters declared a fire out by 2:30 p.m. A total of 50 firetrucks responded to the fire.

Meanwhile, the BFP in its report said that while there were no casualties in the incident, one male victim suffered a burn on the right shoulder.

Damage caused by the fire is estimated to have reached P150,000, with a total of 120 houses burned and 330 individuals affected.

The BFP said that the cause of the fire is still under investigation.

Fire breaks out at Cuneta Astrodome while pediatric vaccination was ongoing

Read Next
Sotto, Lacson test negative for drugs
EDITORS' PICK
Do all the things you do, faster
Motorcycles, smartphones, and cash prizes up for grabs in TNT’s ‘Tuloy Ang Saya’ Raffle in Mindanao
House energy committee chair Arroyo bats for cheap electricity
NCR at increased COVID risk again
New PS-DBM director says DepEd laptop MOA ‘not legal’
House okays budget; ways to go in Senate
MOST READ
Robredo’s tarpaulin portrait at Palace just a ‘placeholder’
Shopee PH gets flak for getting Toni Gonzaga
Robredo supporter tackles elephant in room: No massive fraud in 2022 polls, surveys were just right
DepEd: We are in a crisis situation in education sector
Don't miss out on the latest news and information.