Guns, stress and politics: US road rage shootings on the rise | Inquirer News 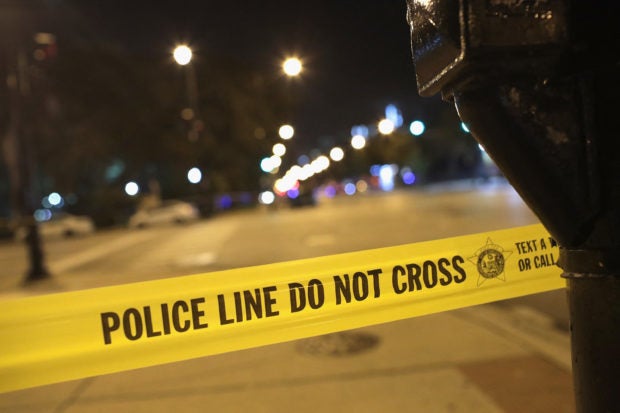 Police investigate the scene of a shooting near the Chinatown neighborhood where four people were shot in an apparent road rage incident on September 19, 2018 in Chicago, Illinois. AFP FILE PHOTO

WASHINGTON — After a speeding driver cut her off abruptly on a Californian highway in May, Joanna Cloonan gestured rudely towards the car. A passenger grabbed a pistol and fired at her vehicle, killing her six-year-old son in the back seat.
A woman in Texas was shot in the back last week while shielding her seven-year-old daughter from gunfire toward their vehicle, and another driver in Kentucky is recovering from gunshot wounds sustained after an argument involving a parking space.
Road rage incidents involving a gun have been responsible for record levels of injury and death in the United States since the start of the Covid-19 pandemic, according to a recent report from Everytown for Gun Safety, a nonprofit that advocates against gun violence.
Data shows that traffic skirmishes involving firearms have been on the rise since 2018, and the report said that “if current trends continue, 2021 is on track to be the deadliest year on record.”
The pandemic, which introduced many new sources of stress to people’s lives, has also seen record increases in gun sales and shootings, Everytown said.

Ryan Martin, an anger researcher at the University of Wisconsin-Green Bay, told AFP that “just the existence of a life-threatening illness puts people on edge, when the frustrations that they encounter would have been kind of mild two years ago.”
In a country where the right to bear arms is fiercely guarded, the omnipresence of guns magnifies the problem, according to Martin, a psychology professor.
Firearms are “a driving factor in multiple ways because it gives you a lethal mechanism to act out that anger,” he said.
“Data also shows that having a gun in the car with you makes you more likely to become angry. It’s called the weapons effect.”
Individualistic American attitudes may also be partly to blame.
“The individualism that we see in the US probably exacerbates a lot of anger response. There is a sense of entitlement that comes with the way in which Americans tend to think about freedom,” Martin said.
Martin and emotional management specialist Pauline Wallin both suggest that deep political divides also contribute to the violence.
Wallin, a psychologist based in Pennsylvania, said that because Americans are increasingly polarized, a person cutting you off in traffic is more likely seen as the “enemy” rather than an “inconvenience.”
“We’re more apt to blame other people for what happened,” she said. “It’s somebody else’s fault… it’s all about narcissism.”
Even pandemic safety measures like masks became framed as a political debate under former president Donald Trump, and divisive messaging did not disappear with his administration, Wallin said.
“Poor management of frustration” is at fault for most road rage incidents, according to the psychologist.
“You have to take some deep breaths. You have to calm yourself down because you can’t think logically when you’re very upset,” she said. “Ask yourself, will this matter tomorrow? In a week?”
Martin said drivers have to realize that engaging in an aggressive, hostile way is “never going to be a positive outcome.”
“Let it go,” he advised.
ADVERTISEMENT
FEATURED STORIES
NEWSINFO
Shopee PH gets flak for getting Toni Gonzaga
NEWSINFO
Padilla recovering after undergoing heart procedure
NEWSINFO
Having confidential funds not a DepEd norm – Pimentel
Read Next
Chinese Navy shooed away Lacson’s plane during Pag-asa Island visit
EDITORS' PICK
Smart, TNT launch more powerful and value-packed Double GIGA+ 50 offer
Motorcycles, smartphones, and cash prizes up for grabs in TNT’s ‘Tuloy Ang Saya’ Raffle in Mindanao
Having confidential funds not a DepEd norm – Pimentel
Pagasa: No tropical cyclone expected in the next few days
NDRRMC confers posthumous award on 5 fallen Bulacan rescuers
House energy committee chair Arroyo bats for cheap electricity
MOST READ
DOJ indicts Kazuo Okada, Tonyboy Cojuangco, et al., for grave coercion during casino hotel takeover
Sharon Cuneta ‘turned away’ at Hermes boutique in Seoul, welcomed by LV
Minority senators seek probe on ‘extraordinary’ Grand Lotto draw
PCSO says Grand Lotto winners were ‘loyal to their numbers’
Don't miss out on the latest news and information.